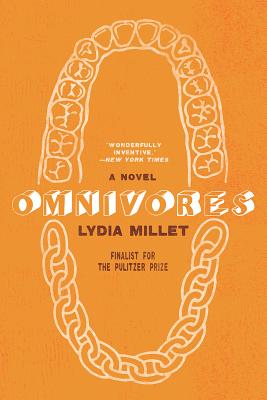 Lydia Millet’s debut novel, first published in 1996, is an explosive satire that scorches our culture’s monstrous men and institutions.

In a claustrophobic, surreal California house, teenager Estée Kraft lives with her domineering father, whose obsession with insect taxonomy bleeds into sadism. As his schemes multiply, Estée’s bedridden mother, entranced by the glow of the shopping channel, remains oblivious to the escalating chaos. Estée manages to escape her childhood home only to find new horrors awaiting her in marriage and motherhood. In a climactic twist, her traumas take form in flesh and blood—a legacy of the voracious male appetites that have haunted her life.

With acerbic wit, philosophical depth, and enthralling lyricism, Omnivores cuts to the core of America’s hypocrisies and anxieties, and introduced Lydia Millet as one of the wildest satirists of our time.

Lydia Millet has written twelve works of fiction. She has won awards from PEN Center USA and the American Academy of Arts and Letters, and her books have been longlisted for the National Book Award, shortlisted for the National Book Critics Circle Award and Los Angeles Times Book Prize, and named as New York Times Notable Books. Her story collection Love in Infant Monkeys was a Pulitzer Prize finalist. She lives outside Tucson, Arizona.


If Flannery O’Connor came back from the dead and abandoned her fixation with Southern religion, she might be proud to write something like Lydia Millet’s astonishing first novel, Omnivores.