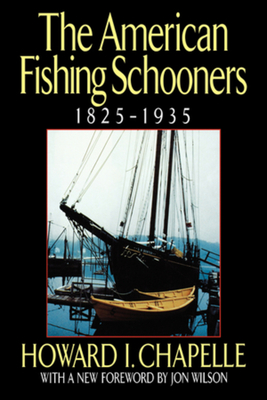 An important feature of the book is its illustrated glossary-appendix, which covers items of hull construction and equipment, rigging and gear, colour and carving, and includes notes by the builders and riggers themselves.

The evolution of the American fishing schooner from the 18th century to the last working and racing schooners of the mid-1930s is recounted in this book. The designers, builders and crews are discussed, and 137 plans of schooners show graphically the development of the type.

Howard I. Chapelle (1901-1975) was an American naval architect, and curator of maritime history at the Smithsonian Institution. In addition, he authored many books and articles books on maritime history and marine architecture, including Yacht Designing and Planning, Boatbuilding: A Complete Handbook of Wooden Boat Construction, The History of American Sailing Ships,The History of the American Sailing Navy: The Ships and Their Development, American Small Sailing Craft, and many more.

Jon Wilson grew up under the heady influence of the ocean's forces and fragrances on the Rhode Island and Connecticut shores. Taking more naturally to New England's saltwater traditions than its academic ones, he became a carpenter and builder of wooden boats before launching WoodenBoat magazine from a cabin in Maine in 1974. In the wake of that magazine's international success and influence, Wilson sensed an opportunity to create a new magazine that could further thinking and dialog on the deeply human and personal aspects of challenging individual and social issues. He began working on ideas for Hope magazine in 1994, and launched the magazine in early 1996. He is Publisher and Editor-in-Chief of Hope.