Hero of the Empire: The Boer War, a Daring Escape, and the Making of Winston Churchill (Hardcover) 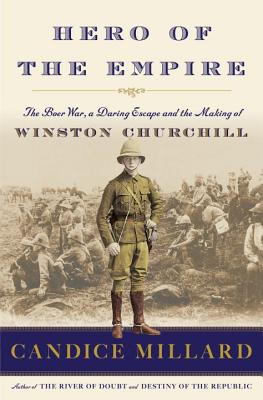 Hero of the Empire: The Boer War, a Daring Escape, and the Making of Winston Churchill (Hardcover)

“No one was more certain that he was destined for greatness than Winston Churchill and he let nothing deter or discourage him from achieving that goal. The young Churchill saw his path to prominence and power through fearless exploits in the British Army and as a war correspondent. England's brutal war with the Boer rebels in southern Africa would prove to be his crucible. Millard's exciting chronicle of Churchill's experiences there, both daring and humbling, is a fitting tribute to a man whose early dreams of glory proved to be a self-fulfilling prophesy.”
— Alden Graves (E), Northshire Bookstore, Manchester Center, VT

From New York Times bestselling author of Destiny of the Republic and The River of Doubt, a thrilling narrative of Winston Churchill's extraordinary and little-known exploits during the Boer War

At age twenty-four, Winston Churchill was utterly convinced it was his destiny to become prime minister of England one day, despite the fact he had just lost his first election campaign for Parliament.  He believed that to achieve his goal he must do something spectacular on the battlefield.  Despite deliberately putting himself in extreme danger as a British Army officer in colonial wars in India and Sudan, and as a journalist covering a Cuban uprising against the Spanish, glory and fame had eluded him.

Churchill arrived in South Africa in 1899, valet and crates of vintage wine in tow, there to cover the brutal colonial war the British were fighting with Boer rebels. But just two weeks after his arrival, the soldiers he was accompanying on an armored train were ambushed, and Churchill was taken prisoner.  Remarkably, he pulled off a daring escape--but then had to traverse hundreds of miles of enemy territory, alone, with nothing but a crumpled wad of cash, four slabs of chocolate, and his wits to guide him.

The story of his escape is incredible enough, but then Churchill enlisted, returned to South Africa, fought in several battles, and ultimately liberated the men with whom he had been imprisoned.

Churchill would later remark that this period, "could I have seen my future, was to lay the foundations of my later life." Millard spins an epic story of bravery, savagery, and chance encounters with a cast of historical characters—including Rudyard Kipling, Lord Kitchener, and Mohandas Gandhi—with whom he would later share the world stage. But Hero of the Empire is more than an adventure story, for the lessons Churchill took from the Boer War would profoundly affect 20th century history.
CANDICE MILLARD is the author of the New York Times bestsellers The River of Doubt and Destiny of the Republic. She lives in Kansas City with her husband and three children.

"A thrilling account...This book is an awesome nail-biter and top-notch character study rolled into one...Could someone be persuaded to make a movie about this episode of his life? I’d watch."
—New York Times Critic Jennifer Senior's Top Ten Books of 2016

"A gripping story...It's a thrilling journey and Millard tells it with gusto."
—The Guardian

“Millard’s tome is a slam-bang study of Churchill’s wit and wile as he navigates the Boer War like [a] proto-James Bond.”
—USA Today