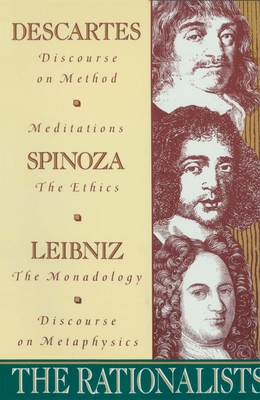 Founded in the mid-17th century, Rationalism was  philosophy's first step into the modern era. This  volume contains the essential statements of  Rationalism's three greatest figures: Descartes, who  began it; Spinoza, who epitomized it; and Leibniz,  who gave it its last serious expression.

Rene Descartes (1596-1650), the French philosopher and mathematician, is generally regarded as the founder of modern philosophy.

Benedict de Spinoza (1632–1677) was born in Amsterdam, where his orthodox Jewish family had fled from persecution in Portugal. Expelled from the synagogue for his heterodox philosophy, he identified God with nature and denied the possibility of an act of creation.

Gottfried Wilhelm Von Leibniz (1646 - 1716) German philosopher, mathematician, and political adviser, important both as a metaphysician and as a logician and distinguished also for his independent invention of the differential and integral calculus.