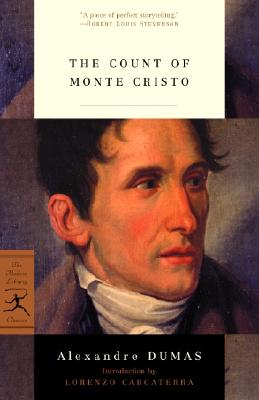 By Alexandre Dumas, Lorenzo Carcaterra (Introduction by)
$16.00
On Our Shelves Now

A popular bestseller since its publication in 1844, The Count of Monte Cristo is one of the great page-turning thrillers of all time. Set against the tumultuous years of the post-Napoleonic era, Alexandre Dumas’s grand historical romance recounts the swashbuckling adventures of Edmond Dantès, a dashing young sailor falsely accused of treason. The story of his long imprisonment, dramatic escape, and carefully wrought revenge offers up a vision of France that has become immortal. As Robert Louis Stevenson declared, “I do not believe there is another volume extant where you can breathe the same unmingled atmosphere of romance.”

Lorenzo Carcaterra is the #1 New York Times bestselling author of Sleepers, A Safe Place, Apaches, Gangster, Street Boys, Paradise City, Chasers, Midnight Angels, and The Wolf. He is a former writer/producer for Law & Order and has written for National Geographic Traveler, The New York Times Magazine, Details, and Maxim. He lives in New York City with Gus, his Olde English Bulldogge, and is at work on his next novel.