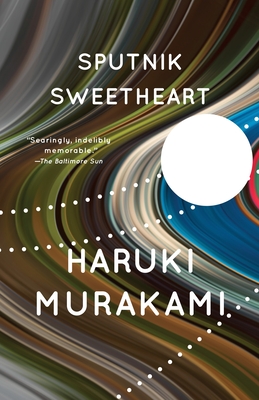 Perhaps there are better Murakami novels, but Sputnik Sweetheart is my favorite. K and Sumire are friends from university. K stoically pines for Sumire but Sumire is only interested in writing until she meets Miu. One day, while Miu and Sumire are vacationing in Greece, Sumire just disappears. Such a beautiful story summed up best by K - When the orbits of these two satellites of ours happened to cross paths, we could be together. Maybe even open our hearts to each other. But that was only for the briefest moment.

— From Murakami and More

K is madly in love with his best friend, Sumire, but her devotion to a writerly life precludes her from any personal commitments. At least, that is, until she meets an older woman to whom she finds herself irresistibly drawn. When Sumire disappears from an island off the coast of Greece, K is solicited to join the search party—and finds himself drawn back into her world and beset by ominous visions. Subtle and haunting, Sputnik Sweetheart is a profound meditation on human longing.

Born in Kyoto, Japan, in 1949, Haruki Murakami grew up in Kobe and now lives near Tokyo. The most recent of his many honors is the Yomiuri Literary Prize, whose previous recipients include Yukio Mishima, Kenzaburo Oe, and Kobo Abe. His work has been translated into moer than fifty languages.

“Murakami is a genius.” –Chicago Tribune

“An agonizing, sweet story about the power and the pain of love. . . . Immensely deepened by perfect little images that leave much to be filled in by the reader’s heart or eye.” –The Baltimore Sun

“[Murakami belongs] in the topmost rank of writers of international stature.” –Newsday

“Murakami’s true achievement lies in the humor and vision he brings to even the most despairing moments.” –The New Yorker

“Murakami . . . has a deep interest in the alienation of self, which lifts [Sputnik Sweetheart] into both fantasy and philosophy.” –San Francisco Chronicle