Eliot After "The Waste Land" (Hardcover) 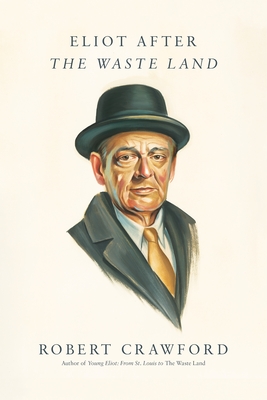 Eliot After "The Waste Land" (Hardcover)

Young Eliot: From St. Louis to "The Waste Land" was hailed as “exceptional” and “assiduous” (The New York Times). Robert Crawford’s meticulous, incisive scholarship continues in Eliot After "The Waste Land", an invaluable record of the revolutionary modernist, visionary poet, and troubled man.

After being kept from the public for more than fifty years, the letters between T. S. Eliot and his longtime love and muse Emily Hale were unsealed in 2020. Drawing on these intimate exchanges and on countless interviews and archives, as well as on Eliot’s own poetry and prose, the award-winning biographer Robert Crawford completes the narrative he began in Young Eliot. Eliot After “The Waste Land”, the long-awaited second volume of Crawford’s magisterial, meticulous portrait of the twentieth century’s most significant poet, tells the story of the mature Eliot during his years as a world-renowned writer and intellectual, including his complex interior life.

Chronicling Eliot’s time as an exhausted bank employee after the publication of The Waste Land through the emotional turmoil of the 1920s and 1930s and his years as a firewatcher in bombed wartime London, Crawford shows us the public and personal experiences that helped inspire Eliot’s later masterpieces. Crawford describes the poet’s conversion to Anglo-Catholicism, his separation from Vivien Haigh-Wood and his happy second marriage to Valerie Fletcher, his editorship at Faber and Faber, his Nobel Prize, his great work Four Quartets, and his adventures in the theater.

Crawford presents this complex and remarkable man not as a literary monument but as a human being: as husband, lover, and widower; as banker, editor, playwright, and publisher; and most of all as an epoch-shaping poet struggling to make art amid personal disasters.

Robert Crawford is the author of Young Eliot: From St. Louis to “The Waste Land”. He is also the author of Scotland’s Books and the coeditor of The Penguin Book of Scottish Verse. A fellow of the Royal Society of Edinburgh, of the British Academy, and of the Royal Society of Literature, he is an emeritus professor of modern Scottish literature at the University of St. Andrews. The Bard, his biography of Robert Burns, was named the Saltire Society Scottish Book of the Year in 2009. Crawford’s poetry collections include Testament and Full Volume, the latter of which was short-listed for the T. S. Eliot Prize. He lives in Scotland.

“Robert Crawford completes his monumental life of T.S. Eliot . . . A deeply informed biographical narrative that offers fresh insights into one of the 20th century’s premier poets . . . Crawford’s biographical net is a wide one, and I was more than once surprised and touched by something new that enriches the ‘unpleasant’ Mr. Eliot into something other—richer and more strange.” —William H. Pritchard, The Wall Street Journal

"Crawford’s work is impeccable . . . The portrait of the poet’s final years is one of joy." —Erica Wagner, The New Statesman

"Intimate . . . Crawford, himself a poet as well as a top-notch literary scholar . . . makes a strong case that suppression and sublimation of desire were instrumental in Eliot’s greatness.” —Brendan Driscoll, Booklist

"The completed portrait of a man who has been in the public eye for over a hundred years, but has never before been seen in quite this way." —Julia Hass, Lit Hub

"Magisterial . . . This book is properly complex, both in terms of the art and the life." —Stuart Kelly, The Scotsman

“Revelatory . . . Braiding piquant detail with rich analysis, Crawford illuminates the contradictions that make Eliot such a fascinating symbol of his times." —Publishers Weekly