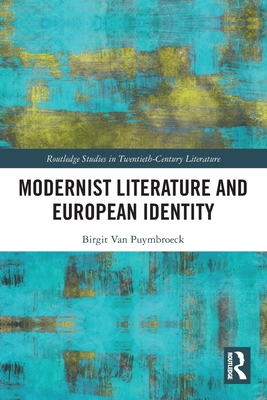 Modernist Literature and European Identity examines how European and non-European authors debated the idea of Europe in the first half of the twentieth century. It shifts the focus from European modernism to modernist Europe, and shows how the notion of Europe was constructed in a variety of modernist texts. Authors such as Ford Madox Ford, T. S. Eliot, Gertrude Stein, Aim C saire, and Nancy Cunard each developed their own notion of Europe. They engaged in transnational networks and experimented with new forms of writing, supporting or challenging a European ideal. Building on insights gained from global modernism and network theory, this book suggests that rather than defining Europe through a set of core principles, we may also regard it as an open or weak construct, a crossroads where different authors and views converged and collided.

Birgit Van Puymbroeck is Postdoctoral Fellow of the Research Foundation Flanders at Ghent University. Her research interests include modernism, literary networks, and media. Her work has been published in various scholarly journals, including PMLA, Modernist Cultures, Modern Language Review, and English Literature in Transition, 1880-1920. She is the former editor-in-chief of the Journal of Diversity and Gender Studies and a member of the Young Academy of Belgium.