Animal, Vegetable, Junk: A History of Food, from Sustainable to Suicidal (Paperback) 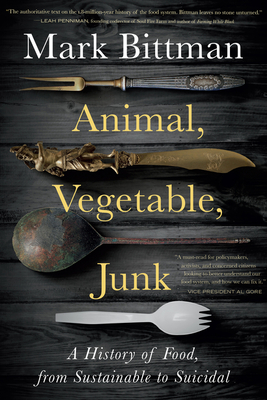 Animal, Vegetable, Junk: A History of Food, from Sustainable to Suicidal (Paperback)


On Our Shelves Now
From hunting and gathering to GMOs and ultra-processed foods, this expansive tour of human history rewrites the story of our species and points the way to a better future.

The history of Homo sapiens is usually told as a story of technology or economics. But there is a more fundamental driver: food. How we hunted and gathered explains our emergence as a new species and our earliest technology; our first food systems, from fire to agriculture, tell where we settled and how civilizations expanded. The quest for food for growing populations drove exploration, colonialism, slavery, even capitalism.

A century ago, food was industrialized. Since then, advancing styles of agriculture and food production have written a new chapter of human history, one that’s driving both climate change and global health crises. Best-selling food authority Mark Bittman offers a panoramic view of the story and explains how we can rescue ourselves from the modern wrong turn.
MARK BITTMAN is the author of more than thirty books, including the How to Cook Everything series and the #1 New York Times bestseller VB6: Eat Vegan Before 6:00 to Lose Weight and Restore Your Health . . . for Good. He was a food columnist, opinion columnist, and the lead magazine food writer at the New York Times, where he started writing in 1984 and remained for more than thirty years.

Bittman has starred in four television series, including Showtime’s Emmy-winning Years of Living Dangerously. He is a longtime Today regular and has made hundreds of television, radio, and podcast appearances, including on Jimmy Kimmel Live!, Real Time with Bill Maher, and CBS’s The Dish; and on NPR’s All Things Considered, Fresh Air, and Morning Edition.

Bittman has written for countless publications and spoken at dozens of universities and conferences; his 2007 TED talk “What’s wrong with what we eat?” has almost five million views. He was a distinguished fellow at the University of California, Berkeley, and a fellow at the Union of Concerned Scientists. He has received six James Beard Awards, four IACP Awards, and numerous other honors.

Bittman is currently special advisor on food policy at Columbia University’s Mailman School of Public Health, where he teaches and hosts a lecture series. He is also the editor in chief of Heated. His most recent book is his history of food and humanity, Animal, Vegetable, Junk.

A New York Times Book Review Editors' Choice   "Epic and engrossing...a clear and compelling compendium of modern agriculture....[Bittman] has earned the right to damn the evident flaws of our system."—The New York Times Book Review   “An expert’s vigorous argument for systemic food reform.”—Kirkus Reviews   “Little in the present food world escapes [Bittman's] critical eye...[his] work is certain to increase controversy over the future of food.”—Booklist   “The climate crisis, COVID-19, and the recent reckoning with systemic and institutional racism have all revealed the many cracks in our global food system. In this thorough and revealing book, Mark Bittman discusses how we got to this point when reform is so essential, and presents the solutions to improve how we grow, distribute, and consume our food. A must read for policymakers, activists, and concerned citizens looking to better understand our food system, and how we can fix it.”—Vice President Al Gore     “Compelling and ambitious, Bittman's Animal, Vegetable, Junk is the authoritative text on the 1.8 million year history of the food system. We begin our journey with the first taming of fire to hunt and cook, witness the use of fire in indigenous swidden agriculture to prepare the ground, and finally arrive at the fanning of revolutionary fire of peasant farmers organizing against multinational agribusiness. Bittman leaves no stone unturned in the quest to understand how Big Food expropriated our land, water, and sustenance. Everyone who eats needs to read this book. The future of our species and our planet depends on it.”—Leah Penniman, founding co-director of Soul Fire Farm and author of Farming While Black     “Eating well, as Mark Bittman has taught so many of us over the years, is as much about collective health as it is about elegant recipes. In his most radical and profound book to date, Bittman brings his trademark wit, precision, and user-friendliness to a sweeping history of sustenance. The result is a joyful and transformational read.”—Naomi Klein, author of This Changes Everything   “A brilliant and insightful explanation of the food system. Bittman's writing is succinct and entertaining, and his recommendations are spot on.”—David A. Kessler, M.D., former FDA commissioner and author of The End of Overeating and Fast Carbs, Slow Carbs   “It’s easy to be jealous of Mark Bittman. He knows how to cook everything, and he writes so clearly that you’ll feel you can too. Now, he brings his prodigious talents to a history of how we eat. Once again, he has trimmed the fat and delivered it all. From the origins of the human diet to the World Trade Organization, you’ll find how they’re all connected in a broken food system. And his analysis is so compelling, you’ll not only understand what’s wrong, but also how to start to make it better.”—Raj Patel, author of Stuffed and Starved     “If you, like me, think and worry about what you eat and also about the planet that is actually providing sustenance to you—and the other 7 billion of us—you need to read this amazing book. You also, as Mr. Bittman suggests, need to become an eater and an advocate, and push for the policy change needed to give everyone access to the nutritious food necessary to survive and thrive.”—Ted Danson, actor and activist     “This is the perfect book for this moment in time, and Mark —