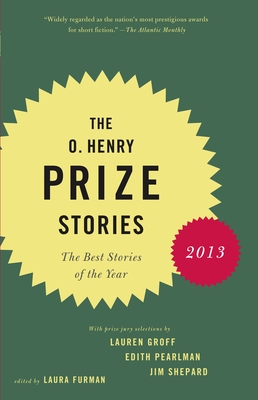 The O. Henry Prize Stories 2013 gathers twenty of the best short stories of the year, selected from thousands published in literary magazines. The winning stories take place in such far-flung locales as a gorgeous sailboat in Hong Kong, a Cuban sugar plantation, the Kenai River in Alaska, a mansion in New Delhi, a ship torpedoed by a German U-boat, and the ghost-haunted rubble of a Turkish girls’ school. Also included are the editor’s introduction, essays from the jurors (Lauren Groff, Edith Pearlman, and Jim Shepard) on their favorite stories, observations from the winners on what inspired them, and an extensive resource list of magazines.

Laura Furman, series editor of The O. Henry Prize Stories since 2003, is the winner of fellowships from the Guggenheim Foundation and the National Endowment for the Arts for her fiction. The author of seven books, including her recent story collection The Mother Who Stayed, she taught writing for many years at the University of Texas at Austin. She lives in Central Texas.

"Another installment [of] the esteemed literary award volume, full, as ever, of exemplary short fiction....  Essential for students of contemporary fiction." --Kirkus Reviews

“Widely regarded as the nation’s most prestigious awards for short fiction.” —The Atlantic Monthly