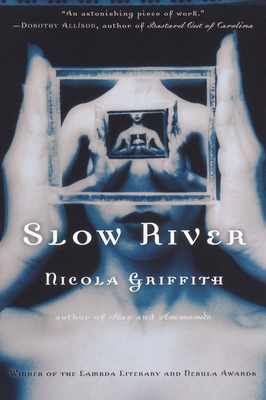 She awoke in an alley to the splash of rain. She was naked, a foot-long gash in her back was still bleeding, and her identity implant was gone. Lore Van Oesterling had been the daughter of one of the world's most powerful families...and now she was nobody, and she had to hide.

Then out of the rain walked Spanner, predator and thief, who took her in, cared for her wound, and taught her how to reinvent herself again and again. No one could find Lore now: not the police, not her family, and not the kidnappers who had left her in that alley to die. She had escaped...but the cost of her newfound freedom was crime and deception, and she paid it over and over again, until she had become someone she loathed.

Lore had a choice: She could stay in the shadows, stay with Spanner...and risk losing herself forever. Or she could leave Spanner and find herself again by becoming someone else: stealing the identity implant of a dead woman, taking over her life, and creating a new future.

But to start again, Lore required Spanner's talents--Spanner, who needed her and hated her, and who always had a price. And even as Lore agreed to play Spanner's game one final time, she found that there was still the price of being a Van Oesterling to be paid. Only by confronting her family, her past, and her own demons could Lore meld together who she had once been, who she had become, and the person she intended to be...

Nicola Griffith is a native of Yorkshire, England, where she earned her beer money teaching women’s self-defense, fronting a band, and arm-wrestling in bars, before discovering writing and moving to the United States. Her immigration case was a fight and ended up making new law: the State Department declared it to be “in the National Interest” for her to live and work in this country. This didn’t thrill the more conservative powerbrokers, and she ended up on the front page of The Wall Street Journal, where her case was used as an example of the country’s declining moral standards.

In 1993 a diagnosis of multiple sclerosis slowed her down a bit, and she concentrated on writing: Ammonite (1993), Slow River (1995), The Blue Place (1998), Stay (2002), Always (2007), and Hild (2013). Griffith is the co-editor of the Bending the Landscape series of original short fiction. Her multimedia memoir, And Now We Are Going to Have a Party: Liner Notes to a Writer’s Early Life, is a limited collector’s edition. Her essays and short fiction have appeared in an assortment of academic texts and a variety of journals, including Nature, New Scientist, Los Angeles Review of Books, and Out. She’s won the Washington State Book Award, the Tiptree, Nebula, the World Fantasy Award, the Premio Italia, and the Lambda Literary Award (six times), among many others.

Now a dual U.S./U.K. citizen, Nicola Griffith is married to writer Kelley Eskridge. They live in Seattle, where Griffith is currently lost in the seventh century, emerging occasionally to drink just the right amount of beer and take enormous delight in everything.