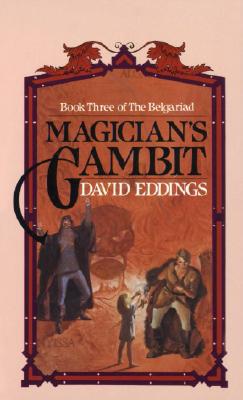 This is book number 3 in the The Belgariad series.

This carries on the magnificent epic of The Belgariad, begun in Pawn of Prophecy and Queen of Sorcery, a fantasy set against a background of a war of men, Kings, and Gods that had spanned seven thousand years—a novel of fate, strange lands, and a prophecy that must be fulfilled!

Everyone knew that the tales of the Orb that protected the West from the evil God Torak were just silly legends. But here she was, forced to join a serious and dangerous quest to recover that stolen Orb. No one believed in sorcery. Yet Garion’s aunt and grandfather seemed to be the fabled sorcerers Polgara and Belgarath, who would have to be thousands of years old. Even young Garion was learning to do things that could only be sorcery.

Garion! He was nothing but a farm boy, totally unsuitable for an Imperial Princess. Then why did she have such an urge to teach him, to brush back his tangled hair, and to comfort him?

Now he was going to a strange tower in the center of all he believed evil, to face some horrible, powerful magician. And she wouldn’t be there to watch over him.