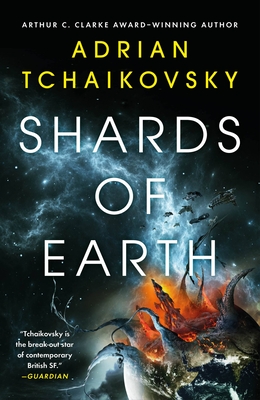 This is book number 1 in the The Final Architecture series.

The Arthur C. Clarke award-winning author of Children of Time brings us an extraordinary space opera about humanity on the brink of extinction, and how one man's discovery will save or destroy us all.

The war is over. Its heroes forgotten. Until one chance discovery . . .

Idris has neither aged nor slept since they remade him in the war. And one of humanity's heroes now scrapes by on a freelance salvage vessel, to avoid the attention of greater powers.

After earth was destroyed, mankind created a fighting elite to save their species, enhanced humans such as Idris. In the silence of space they could communicate, mind-to-mind, with the enemy. Then their alien aggressors, the Architects, simply disappeared—and Idris and his kind became obsolete.

Now, fifty years later, Idris and his crew have discovered something strange abandoned in space. It's clearly the work of the Architects—but are they returning? And if so, why? Hunted by gangsters, cults and governments, Idris and his crew race across the galaxy hunting for answers. For they now possess something of incalculable value, that many would kill to obtain.

Adrian Tchaikovsky was born in Woodhall Spa, Lincolnshire, and headed off to university in Reading to study psychology and zoology. For reasons unclear even to himself, he subsequently ended up in law. Adrian has since worked as a legal executive in both Reading and Leeds and now writes full time. He also lives in Leeds, with his wife and son. Adrian is a keen live role-player and occasional amateur actor. He has also trained in stage-fighting and keeps no exotic or dangerous pets of any kind—possibly excepting his son.


"Enthralling, epic, immersive and hugely intelligent. This might be Tchaikovsky's best so far, and that's saying something."—Stephen Baxter

"Adrian Tchaikovsky: king of the spiders, master worldbuilder, and asker of intriguing questions. His books are packed with thought-provoking ideas (as well as lots of spiders; did I mention the spiders?). One of the most interesting and accomplished writers in speculative fiction."—Christopher Paolini

"Tchaikovsky writes space opera on a grand scale, creating a massive, complex, vividly realized future environment...He guides the reader through this endlessly intriguing universe with a rock-steady sure hand. Fans of space opera should leave the book in breathless anticipation of the second installment in the trilogy.”

“Dazzlingly suspenseful...Tchaikovsky’s intricately constructed world is vast yet sturdy enough to cradle inventive science, unique aliens, and complex political machinations. With a mix of lively fight scenes, friendly banter, and high-stakes intrigue, this is space opera at its best.”

“Adrian Tchaikovsky’s Shards of Earth is one of the most stunning space operas I’ve read this year...Tchaikovsky’s world building is on glorious display as he throws all manner of spaceships, creepy aliens and strange technology into a delicious sci-fi soup. It’s dense, it’s funny, it’s exciting, it’s touching and it’s perfect for someone looking for a space opera built on a grand scale.”

"Inventive, funny and engrossing, this book lingers long after you close it." ?Tade Thompson, Arthur C. Clarke Award-winning author of Rosewater on The Doors of Eden

"Full of sparking, speculative invention...The Doors of Eden is a terrific timeslip / lost world romp in the grand tradition of Turtledove, Hoyle, even Conan Doyle. If you liked Primeval, read this book." ?Stephen Baxter on The Doors of Eden

"What a ride...talks like big-brained science fiction and runs like a fleet-footed political thriller."?John Scalzi on The Doors of Eden