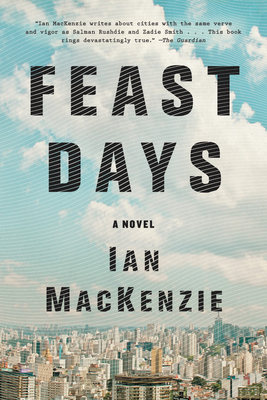 Intelligent and deeply felt, Feast Days follows a young wife who relocates with her financier husband to São Paulo -- a South American megacity that impresses and unsettles, conceals and erupts. Here in her new home, she reckons with the twenty-first century as she encounters crime, protests, refugees gentrification, and the collision of art and commerce, while confronting the crisis slowly building inside her own marriage.

In stylish prose and with piercing wit, Ian MacKenzie tells the story of Emma, a young woman who has moved from New York to Brazil just as massive demonstrations against the government are breaking out across the country amid growing economic inequality. Emma has come to Brazil for her husband's career, with no job prospects of her own, a weak grasp of the language, and a deep ambivalence about having a child. Her early days in Sao Paulo are listless but privileged; she dines at high-end restaurants, tutors wealthy Brazilians in English, and observes the city she now calls home.

But when Emma volunteers at a local church to assist refugees and grows more deeply connected to the people she meets in the course of her days, she finds herself unable to resist the tug of Sao Paulo's political and social unrest.

As the country moves seemingly closer to a breaking point, so does Emma's marriage, as she and her husband can no longer ignore the silent, tectonic shifts beneath the surface of their relationship.

Feast Days is a sharply observed story of expatriate life, as well as a meditation on the hidden costs of modern living and how easily our belief systems can collapse around us.

"Devastating, funny and wise, it's among the best novels I know about the fate of American innocence abroad."-Garth Greenwell

Ian Mackenzie was born and raised in Massachusetts, graduated from Harvard, and since then has lived in New York City, Addis Ababa, Ethiopia, and Sao Paulo, Brazil. He currently lives in Washington, DC.

"MacKenzie's economy is remarkable. He deftly captures how an outsider is only able to comprehend a country in pieces, assembling an incomplete puzzle over time. What holds this portrait of a marriage together, across time and across continents, is Emma's voice...MacKenzie's slender novel feels heavier than many novels twice its weight, dramatizing what it's like for the wealthy to live with the poor in the corner of their eye... In that sense, Feast Days is as much about America as it is about Brazil, as much about San Francisco as São Paulo."—San Francisco Chronicle

"The novel of the ugly American living abroad has bloomed into a genre all its own, one I happen to devour with relish. Among my favorites are Charles Portis's Gringos, Ben Lerner's Leaving the Atocha Station and Nell Zink's The Wallcreeper. MacKenzie's second novel arrives as a worthy addition to that list...Expatriate novels often reveal more about their characters' homelands than they do about their presumably exotic destinations. Feast Days does likewise."—New York Times Book Review

"MacKenzie's first person account of a woman in her late 20s living in São Paulo is one of the most convincing female voices this reviewer has come across....Despite a lack of action - most of the book centers on Emma's interior observations - there is a tension that anything could happen, that snap decisions have life-altering repercussions.... Feast Days is a sophisticated and astute story of expatriate life told from a truly convincing, captivating female voice."
—Irish Times

"This brilliant novel has no time for platitudes or conventional, ankle-deep morality; it plunges us straight to the depths. I'm not sure I know another book that feels at once so disaffected and so full of longing, so expansive in its sympathy and so terrifying in its candor. Devastating, funny and wise, it's among the best novels I know about the fate of American innocence abroad."—Garth Greenwell, author of What Belongs To You

"Ian MacKenzie writes about cities with the same verve and vigour as Salman Rushdie and Zadie Smith.... MacKenzie has found a narrator who can voice many of the uncomfortable issues of our time: one cannot help but read on.... He is exploring the privilege of the white American abroad, and Feast Days delivers cutting criticism.... This book rings devastatingly true.... There is also a delight in words that is wonderful to read, a delicious speed to the prose. Feast Days is not a thriller, but reads a little like one, moving swiftly from one kind of experience to the next with brutal, dazzling effect."—The Guardian

"This highly anticipated new offering from MacKenzie poignantly contrasts the political breakdown of Brazil with the marital breakdown of a pair of expatriates."—Entertainment Weekly

"Feast Days is so much more than a novel. It's an all-consuming meditation on the modern condition, the search for rootedness in the ever-shifting worlds of our own creation, told by a writer so gifted with language that you forget who you are in the poetry of his prose."—Uzodinma Iweala, author of Beasts of No Nation

"There is a sly, brooding intelligence at work in this novel, recalling for me the startling, highest times in American literature. MacKenzie is not just a great writer in the making--he's already there."
—Brad Watson, author of Miss Jane

"Brilliant.... A pervasive sent of unrest, both large and small scale, social and personal, [is] conveyed in MacKenzie's unruffled, discerning prose. With it, MacKenzie has captured one of the most memorable narrative voices in recent fiction."
—Publishers Weekly (starred review)

"Intelligent and atmospheric, Feast Days deftly limns the inner life of a foreigner whose own trajectory becomes increasingly bound up with the tensions and complexities of the society in which she has landed."—Chloe Aridjis, author of Book of Clouds and Asunder