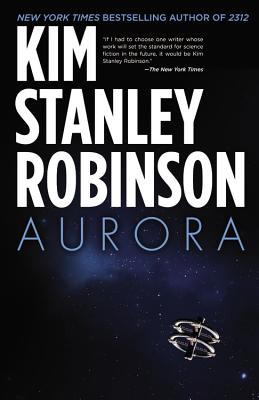 By Kim Stanley Robinson
This book might be hard to find. Ask a bookseller for more information.
Hard to Find

Interstellar colonization is a staple of science fiction and its examples range from high adventure almost swashbuckling to the detailed examination of the "real thing."  Robinson's new novel is one of the latter and in its scrutiny of the possibilities and problems of the whole notion it brings us face to face with enormity such an enterprise would be.  The novel opens as the ship, which has a personality of its own, painstakingly developed over years by the chief engineer, is approaching the goal of its long voyage.  It's a generation ship.  People now alive were not when the ship departed Earth and the present population is impatient for landfall.  But the daughter of the engineer, who by default inherits her mother's reputation aboard ship, becomes the one who has to cope with a series of crises which call the entire project into question, forcing them all to face the choice of trying another system or turning around and heading home, a voyage that will take 170 years.  Robinson's attention to detail and the hard choices his characters must face push Aurora several notches above average. -Mark's September Staff Pick, 2015

A major new novel from one of science fiction's most powerful voices, Aurora tells the incredible story of our first voyage beyond the solar system.

Brilliantly imagined and beautifully told, it is the work of a writer at the height of his powers.

Our voyage from Earth began generations ago.

Now, we approach our new home.

Kim Stanley Robinson is a New York Times bestseller and winner of the Hugo, Nebula, and Locus awards. He is the author of more than twenty books, including the bestselling Mars trilogy and the critically acclaimed Forty Signs of Rain, The Years of Rice and Salt, and 2312. In 2008, he was named a "Hero of the Environment" by Time magazine, and he works with the Sierra Nevada Research Institute. He lives in Davis, California.

"A rousing tribute to the human spirit."
—San Francisco Chronicle on Aurora

"The thrilling creation of plausible future technology and the grandness of imagination...magnificent."—Sunday Times on Aurora

"[Robinson is] a rare contemporary writer to earn a reputation on par with earlier masters such as Isaac Asimov or Arthur C. Clarke."
—Chicago Tribune on Aurora

"If Interstellar left you wanting more, then this novel might just fill that longing."—io9 on Aurora

"Aurora may well be Robinson's best novel...breaks us out of our well-ingrained, supremely well-rehearsed habits of apocalypse - and lets us see the option of a different future than permanent, hopeless standoff." —Los Angeles Review of Books on Aurora

"Humanity's first trip to another star is incredibly ambitious, impeccably planned and executed on a grand scale in Aurora."—SPACE.com on Aurora

"The Apollo 13 of interstellar travel."—SciFi

"[A] near-perfect marriage of the technical and the psychological."—NPR Books on Aurora

"This ambitious hard SF epic shows Robinson at the top of his game...
[A] poignant story, which admirably stretches the limits of human
imagination."
—Publishers Weekly on Aurora

"This is hard SF the way it's mean to be written: technical, scientific, with big ideas and a fully realized society. Robinson is an acknowledged sf master-his Mars trilogy and his stand-alone novel 2312 (2012) were multiple award winners and nominees-and this latest novel is sure to be a big hit with devoted fans of old-school science fiction."—Booklist on Aurora

"Intellectually engaged and intensely humane in a way SF rarely is, exuberantly speculative in a way only the best SF can be, this is the work of a writer at or approaching the top of his game."—Iain M. Banks on 2312