The Hitler Salute: On the Meaning of a Gesture (Paperback) 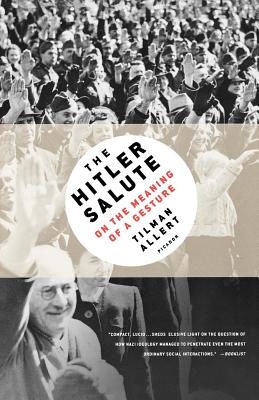 By Tilman Allert
This book might be hard to find. Ask a bookseller for more information.
Out of Print
(This book cannot be returned.)

Sometimes the smallest detail reveals the most about a culture. In The Hitler Salute, sociologist Tilman Allert uses the Nazi transformation of a simple human interaction--the greeting--to show how a shared gesture can usher in the conformity of an entire society. Made compulsory in 1933, the Hitler slaute developed into a daily reflex in a matter of months, and became the norm in schools, at work, among friends, and even at home. Adults denounced neighbors who refused to raise their arms, and children were given tiny Hitler dolls with movable right arms so they could practice the salute. And, of course, each use the greeting invested Hitler and his regime with a divine aura.

The first examination of a phenomenon whose significance has long been underestimated, The Hitler Salute offers new insight into how the Third Reich's rituals of consent paved the way for the wholesale erosion of social morality.

Tilman Allert is a professor of sociology and social psychology at the University of Frankfurt. This is the first of his books to appear in English.

“Compact, lucid . . . straightforward in its analysis yet profound in its conclusions, this uncommon selection sheds elusive light on the question of how Nazi ideology managed to penetrate even the most ordinary social interactions.” —Booklist

“Concise, elegant . . . This little book, with its analytic punch and range of fresh insights, offers a novel contribution to what frequently appears to be an old, tired discussion of the Third Reich.” —Bookforum

“Brilliant, an exmplary study, a true jewel . . . One can only wonder why it took so long for a book about such an important gesture to see the light of day.” —Frankfurter Allgemeine Zeitung

“A short and intensely interesting book . . . which leaves a reader freshly impressed by the peculiar forms of evil the Nazis invented.” —National Post (Canada)