Will Shortz Presents The Monster Book of Sudoku for Kids: 150 Fun Puzzles (Paperback) 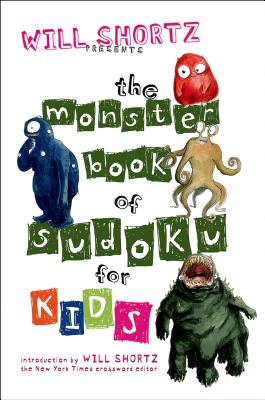 By Will Shortz (Introduction by)
Email or call for price
Backordered

Sudoku has taken America by storm! Now kids can enjoy the puzzle that keeps their parents' minds racing and pencils sharpened. This edition, designed for children 8 and up, begins with a sudoku lesson from Will Shortz and very easy 4 x 4 grids to warm up. Then young solvers advance to more challenging 6 x 6 grids and finally tradition 9 x 9 sudoku puzzles.

Will Shortz has been the crossword puzzle editor of The New York Times since 1993. He is also the puzzlemaster on NPR’s Weekend Edition Sunday and is founder and director of the annual American Crossword Puzzle Tournament. He has edited countless books of crossword puzzles, Sudoku, KenKen, and all manner of brain-busters.

“A puzzling global phenomenon” —The Economist

“The biggest craze to hit The Times since the first crossword puzzle was published in 1935.” —The Times of London

“Sudoku is dangerous stuff. Forget work and family—think papers hurled across the room and industrial-sized blobs of correction fluid. I love it!” —The Times of London

“Sudokus are to the first decade of the 21st century what Rubik's Cube was to the 1970s.” —The Daily Telegraph

“Britain has a new addiction. Hunched over newspapers on crowded subway trains, sneaking secret peeks in the office, a puzzle-crazy nation is trying to slot numbers into small checkerboard grids.” —Associated Press