Plowing the Dark: A Novel (Paperback) 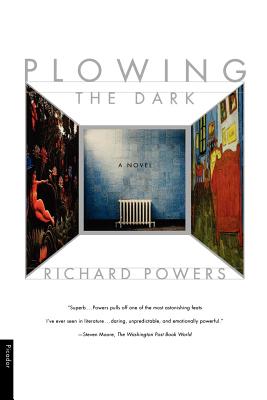 Plowing the Dark: A Novel (Paperback)

Pulitzer Prize-winning author Richard Powers's Plowing the Dark recasts the rules of the novel and remains one his most daring works--a mesmerizing fiction explores the imagination's power to both destroy and save.

In a digital laboratory on the shores of Puget Sound, a band of virtual-reality researchers races to complete the Cavern, an empty white room that can become a jungle, a painting, or a vast Byzantine cathedral. In a war-torn Mediterranean city, an American is held hostage, chained to a radiator in another empty white room. What can possibly join these two remote places? Only the shared imagination, a room that these people unwittingly build in common, where they are all about to meet.

Adie Klarpol, a skilled but disillusioned artist, comes back to life, revived by the thrill of working with cutting-edge technology. Against the collapse of Cold War empires and the fall of the Berlin Wall, she retreats dangerously into the cyber-realities she has been hired to create. On the other side of the globe, Taimur Martin, an English teacher recovering from a failed love affair, is picked up off the streets in Beirut by Islamic fundamentalists and held in solitary captivity.

"Mention Richard Powers' name to other writers and see them get that faraway look in their eyes: They are calculating the eventual reach of his influence."—Sven Birkerts, Esquire

Richard Powers is the author of New York Times bestseller Bewilderment; The Overstory, which won the Pulitzer Prize in Fiction; and The Echo Maker, which won the National Book Award and was a finalist for the Pulitzer Prize; among many other novels. Powers has received a MacArthur Fellowship, a Lannan Literary Award, the James Fenimore Cooper Prize for Historical Fiction, and is a four-time National Book Critics Circle Award finalist. He lives in the foothills of the Great Smoky Mountains.

“Superb...Powers pulls off one of the most astonishing feats I've ever seen in literature...daring, unpredictable, and emotionally powerful.”—Steven Moore, The Washington Post Book World

“America's most ambitious novelist...Plowing The Dark is virtual reality composed in a language that will never go obsolete. No one who becomes immersed in its poetry will walk out the way he or she came in.”—Kevin Berger, The San Francisco Chronicle Book Review

“Plowing The Dark may be [Powers's] most finely executed story yet...Relentless and mesmerizing...a beautiful homage to the sine qua non of consciousness itself...the final triumph of art over pain.”—Gail Caldwell, The Boston Globe

“Powers has an inventive, virtuosic writing style that reserves him a special category in today's fiction...I don't have the space to do justice to all the wonders of craftsmanship in Plowing The Dark...This is the first emblematic novel of the 21st century, a lesson and an inspiration.”—Judy Doenges, The Seattle Times

“[A] tour de force. It has overwhelming inventiveness and fun moments as well.”—Donald Newlove, The Philadelphia Inquirer

“This is, ultimately, a novel of ideas, but one with a soul...There is much to admire in this novel, particularly the ingenious way in which reality is captured.”—Scott Leibs, The San Diego Union-Tribune

“Powers' twin tales are rife with echoes and allusions that reinforce their shared concern with the ways in which we reinvent our worlds.”—Ralph Rugoff, LA Weekly

“Superb...perhaps [Powers'] greatest novel...Nearly every page of Powers' astonishing book has stunning ideas that will force you to re-evaluate everything you thought you knew about these subjects, and the implications you never imagined.”—Steven Moore, The Newark Star-Ledger