Anatomy of a Murder (Paperback) 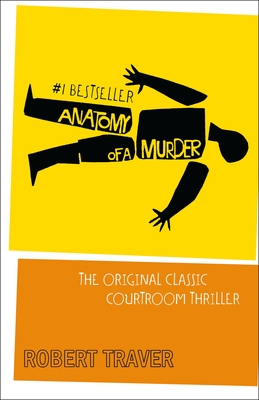 Anatomy of a Murder (Paperback)

First published by St. Martin's in 1958, Robert Traver's Anatomy of a Murder immediately became the number-one bestseller in America, and was subsequently turned into the now classic Otto Preminger film of the same name, starring Jimmy Stewart and Duke Ellington.

A gripping tale of deceit, murder, and a sensational trial, Anatomy of a Murder is unmatched in the authenticity of its settings, events, and characters. This new edition should delight both loyal fans of the past and an entire new generation of readers.

"The characters are as fresh as when they were first created, the tension high, and the cross- examinations and legal chicanery full of suspense. The novel is simply what it says on the cover. A classic." - Tangled Web

Robert Traver is the pseudonym of the former Michigan Supreme Court justice John D. Voelker (1903-1991). His best-selling novel, Anatomy of a Murder (1958), was turned into the award-winning film of the same name. He is also the author of Trout Madness, People Versus Kirk, and Laughing Whitefish, among other works. He lived in the Upper Peninsula of Michigan.

"For the lay reader, the entertainment lies in the action ... but for the lawyer, undoubtedly the greatest pleasure stems from the author's obvious competence in, and love for, the law." - University of Miami Law Review