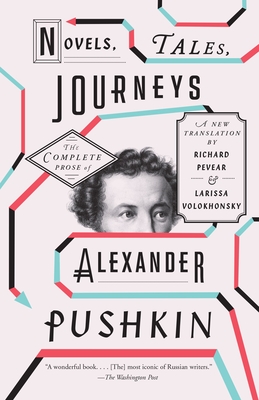 
Backordered
Universally acknowledged as Russia’s greatest poet, Pushkin wrote with the rich, prolific creative powers of a Mozart or a Shakespeare. His prose spans a remarkable range, from satires to epistolary tales, from light comedies to romantic adventures in the manner of Sir Walter Scott, from travel narratives to historical fiction. The haunting dream world of “The Queen of Spades” draws on his own experiences with high-stakes society gambling. The five short stories of The Tales of the Late Ivan Petrovich Belkin are deceptively light as they reveal astonishing human depths, and his short novel, The Captain’s Daughter, a love story set during the Cossack rebellion against Catherine the Great, has been called the most perfect book in Russian literature.

By turns daringly dramatic and sparklingly comic, written in the exquisite cadences of a master, Novels, Tales, Journeys captures the essence of nineteenth-century Russia—and gives us, in one comprehensive volume, the work with which Pushkin laid the foundations of his country’s great prose tradition.
Alexander Pushkin (1799–1837) was a poet, playwright, and novelist who achieved literary prominence before he was twenty. His radical politics led to government censorship and periods of banishment from the capital, but he eventually married a popular society beauty and be­came a regular part of court life. Notoriously touchy about his honor, he died at age thirty-seven in a duel with his wife’s alleged lover.

Together, Richard Pevear and Larissa Volokhonsky have translated works by Tolstoy, Dostoevsky, Chekhov, Gogol, Bulgakov, Leskov, and Pasternak. They were twice awarded the PEN/Book-of-the-Month Club Translation Prize (for Dostoevsky’s The Brothers Karamazov and Tolstoy’s Anna Karenina). They are married and live in France.

“A wonderful book. . . . [The] most iconic of Russian writers.” —The Washington Post

“Brilliant. . . . [Pushkin] took up narrative prose on a whim, but, as this collection makes clear, he mastered it gloriously.” —Los Angeles Review of Books

“Displays the author's immersion in Russian life even more directly than the poetry that has come to define his legacy.” —The New Criterion