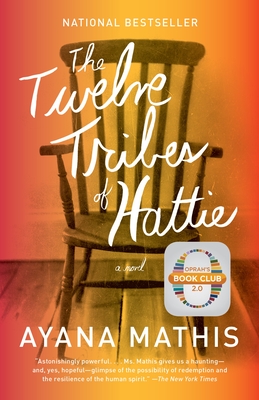 There is something very amazing and important about this book.  The central character Hattie is the thread that ties her children together, but the book is more about her children's struggles.  Each story inhabits a wide range of emotions.  Each child is a vivid individual.  The significance of the book for me was the transformation through a portion of American history and the tiny window of it that we are able to look through.  This book amazed me! -- Shane's Pick

“Hattie came of age in a state and time when a white man could take anything he wanted from a black man, including his life. Like many others, she fled north with her mother and sister, seeking safety and the chance for a better life. Hattie is just 15 when life teaches her these lessons, and 16 when her twin babies die in her arms. Hattie?s story is told in alternating chapters through the children she raised, the trials they gave her, and her perseverance every time life knocked her down. This is the story of a woman's strength and determination and the story of a nation as it wrestles with the oppression of blacks and their striving to achieve equality in a world that judged them solely by the color of their skin.”
— Deon Stonehouse, Sunriver Books, Sunriver, OR

“A remarkable page-turner of a novel.” —Chicago Tribune

In 1923, fifteen-year-old Hattie Shepherd, swept up by the tides of the Great Migration, flees Georgia and heads north. Full of hope, she settles in Philadelphia to build a better life. Instead she marries a man who will bring her nothing but disappointment, and watches helplessly as her firstborn twins are lost to an illness that a few pennies could have prevented. Hattie gives birth to nine more children, whom she raises with grit, mettle, and not an ounce of the tenderness they crave. She vows to prepare them to meet a world that will not be kind. Their lives, captured here in twelve luminous threads, tell the story of a mother’s monumental courage—and a nation's tumultuous journey.

Ayana Mathis is a graduate of the Iowa Writers' Workshop and is a recipient of the Michener-Copernicus Fellowship. The Twelve Tribes of Hattie is her first novel. Originally from Philadelphia, she lives in Brooklyn.

“Astonishingly powerful. . . . Ms. Mathis gives us a haunting—and, yes, hopeful—glimpse of the possibility of redemption and the resilience of the human spirit.” —The New York Times

“Enthralling. . . . One remarkably resilient woman is placed against the hopes and struggles of millions of African Americans who held this nation to its promise.” —The Washington Post

“Captivate[s] from the first pages. . . . As certainly as August Wilson did in the plays of his twentieth-century cycle, Mathis is chronicling our nation.” —The Boston Globe

“The opening pages of Ayana’s debut took my breath away. I can’t remember when I read anything that moved me in quite this way, besides the work of Toni Morrison.” —Oprah Winfrey

“A triumph. . . . Magnificently structured, and a sentence-by-sentence treasure—lyric, direct, and true.” —Salon

“An intimate, often lyrical daisy-chain of stories. . . . We feel the exhilaration of starting over, the basic human need to belong, and the inexorable pull back to a place that, for better and worse, you call home.” —Vogue

“Like Toni Morrison, the author has a gift for showing just how heavily history weighs on families.” —Entertainment Weekly

“Stunningly good. . . . Blazes fearlessly into the darkness of divided spirits and hungry hearts.” —The Seattle Times

“Hypnotic. . . . In this evocative, ambitious novel, the tragedy is biblical, the reckoning stretches over generations, and a gravitas is granted to otherwise-invisible women and men.” —The Plain Dealer

“Beautifully imagined and elegantly written. . . . Ayana Mathis is a hugely talented writer who has authored a wise and ambitious first novel.” —Pittsburgh Post-Gazette

“Written with elegance and remarkable poise. . . . [A novel] as much about our need for joy as it is about our struggles against bitterness.” —The Guardian (London)

“Astonishing. . . . Sounds a depth charge into a character’s life, a charge so powerful we forget we’re reading, we forget the long history of African-Americans in the twentieth century has already been told. We are simply with someone, on a journey, that began long ago and has one determined, sometimes deranged source. Her name is Hattie Shepherd and it’s a name you’ll hear a lot of in years to come.” —The Toronto Star

“Glistens with a quiet, hopeful beauty. . . . This book is a powerful ode to romantic and familial love.” —National Post

“Tough, truthful, wonderfully controlled writing. . . . This fresh, powerful first novel turns the lives of Hattie’s children into an epic of America in the twentieth century.” —The Times (London)

“Vibrant and compassionate. . . . The characters are full of life, mingled thing that it is, and dignified by the writer’s judicious tenderness towards them. This first novel is a work of rare maturity.” —Marilynne Robinson

“Beautiful and necessary from the very first sentence. The human lives it renders are on every page lowdown and glorious, fallen and redeemed, and all at the same time. They would be too heartbreaking to follow, in fact, were they not observed in such a generous and artful spirit of hope, in a spirit of mercy, in the spirit of love.” —Paul Harding

“An excellent debut. . . . Appealingly earthbound and plainspoken, and the book’s structure is ingenious.” —Kirkus Reviews (starred)

“Stunning. . . . Mathis writes with blazing insight into the complexities of sexuality, marriage, family relationships, backbone, fraudulence, and racism in a molten novel of lives racked with suffering yet suffused with beauty.” —Booklist (starred)