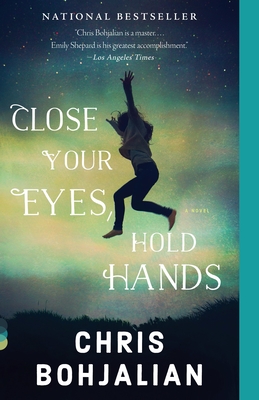 “A very contemporary and controversial subject helps make this novel scarily real. The narrator is Emily, the 14-year-old daughter of parents who both work at a nuclear power plant in the Northeast Kingdom of Vermont. The plant melts down, both parents are killed, and there are questions about their responsibility for the disaster. Experiencing guilt by association, Emily goes on the run and ends up homeless in Burlington. She befriends a nine-year-old boy who is also on the run along with other loners looking to survive. Fast-paced, gritty, and believable, this is a novel perfect for book club discussions.”
— Liza Bernard, Norwich Bookstore, Norwich, VT

NATIONAL BESTSELLER • A heartbreaking, wildly inventive, and moving novel narrated by a teenage runaway, from the bestselling author of The Flight Attendant.

Emily Shepard is on the run; the nuclear plant where her father worked has suffered a cataclysmic meltdown, and all fingers point to him. Now, orphaned, homeless, and certain that she’s a pariah, Emily’s taken to hiding out on the frigid streets of Burlington, Vermont, creating a new identity inspired by her favorite poet, Emily Dickinson.

Then she meets Cameron. Nine years old and with a string of foster families behind him, he sparks something in Emily, and she protects him with a fierceness she didn’t know she possessed. But when an emergency threatens the fledgling home she’s created, Emily realizes that she can’t hide forever.

Chris Bohjalian is the author of twenty books, including The Guest Room; Close Your Eyes, Hold Hands; The Sandcastle Girls; Skeletons at the Feast; The Double Bind; and Midwives which was a number one New York Times bestseller and a selection of Oprah’s Book Club. Chris’s work has been translated into more than thirty languages, and three novels have become movies (Secrets of Eden, Midwives, and Past the Bleachers). Chris lives in Vermont and can be found at www.chrisbohjalian.com or on Facebook, Instagram, Twitter, Litsy, and Goodreads.

“A compelling tale of loss, resilience, and transformation.” —The Boston Globe, “Pick of the Week”

“Suspenseful, provocative, often terrifying yet compassionate. . . . One of the most memorable teenage protagonists in recent fiction.” —The Washington Post

“Heartbreaking. . . . This is an adult novel . . . but readers of any age who love John Green’s novels might find [Emily]’s story, sobering as it is, an awesome one.” —Milwaukee Journal Sentinel

"Stirring, sensitive. . . . One of the most authentic and distinctive voices since Emma Donoghue's [Room].” —San Francisco Chronicle

“I have a new favorite Chris Bohjalian novel.  Close Your Eyes, Hold Hands is a book I wish I'd been smart enough to write:  a masterpiece of narrative voice.” —Jodi Picoult

“Intelligent, rich in detail, filled with full-blooded characters…. Bohjalian at his finest.” —The Seattle Times

“Haunting and resonant.” —The Miami Herald

“Emily’s character is written so well and her story so absorbing (this is very much a read-in-one-or-two-sittings type of book) that it is easy to forget you’re actually reading . . . Close Your  Eyes, Hold Hands reminds us of our innate need for connection.” —Pittsburgh Post-Gazette

“A masterful storyteller . . . Bohjalian hits every note. His characters have depth, his story sings.” —The Advocate (Baton Rouge, LA)

“Bohjalian delivers a thoroughly engrossing and poignant coming-of-age story set against a nightmarish backdrop as real as yesterday’s headlines from Fukushima and Chernobyl. And in Emily he's created a remarkable and complicated teenager . . . [with] a wry, honest voice as distinctive as Holden Caulfield's.”  —Associated Press

“A potent story of loss, hope, and the overpowering yearning for home.”  —The Armenian Weekly

“A dystopian nightmare entwined with a wrenching personal crisis . . . The notion of ‘just a life I left’ grows more intense for somebody like Emily Shepard who can’t return and is unsure about how to go forward.” —Burlington Free Press

“Impressive. . . . [Emily’s] admiration for kindred spirit Emily Dickinson serves to humanize her plight, as does an epiphany in the book’s bittersweet conclusion.” —Publishers Weekly


“Bohjalian once again reveals an uncanny talent for crafting a young female protagonist who is fatally flawed, but nevertheless immensely likable. . . . Resonates with a message of hope, truth and the fragility of life.” —BookPage


“Emily’s voice is a compelling one… and hers is a journey readers will avidly follow.” —Kirkus Reviews