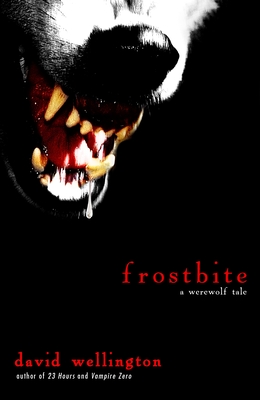 These werewolves are feral, out of control, and absolutely bloodthirsty. And I loved it!. This book is great for those who want to get into the lore of creatures that will have them leaving the night light on.

— From Kalifa
For Cheyenne Clark, there's a bad moon on the rise . . .

There's one sound a woman doesn't want to hear when she's lost and alone in the Arctic wilderness: a howl.

When a strange wolf's teeth slash Cheyenne's ankle to the bone, her old life ends, and she becomes the very monster that has haunted her nightmares for years. Worse, the only one who can understand what Chey has become is the man–or wolf–who's doomed her to this fate. He also wants to chop her head off with an axe.

Yet as the line between human and beast blurs, so too does the distinction between hunter and hunted . . . for Chey is more than just the victim she appears to be. But once she's within killing range, she may find that–even for a werewolf–it's not always easy to go for the jugular.
DAVID WELLINGTON is the author of 23 Hours, Vampire Zero, 99 Coffins, 13 Bullets, and the Monster Island trilogy.

"Entertaining and thrilling...Wellington is a vivid storyteller, whether describing gruesome attacks, expressing the subtle attraction between man and woman or chronicling the life of a troubled teen"
-Associated Press