Black Hearts: One Platoon's Descent into Madness in Iraq's Triangle of Death (Hardcover) 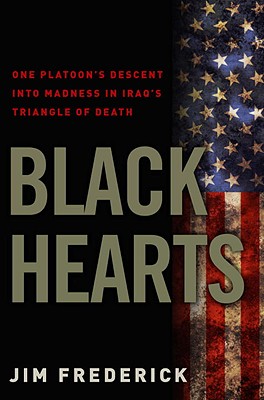 By Jim Frederick
This book might be hard to find. Ask a bookseller for more information.
Special Order

This is the story of a small group of soldiers from the 101st Airborne Division’s fabled 502nd Infantry Regiment—a unit known as “the Black Heart Brigade.” Deployed in late 2005 to Iraq’s so-called Triangle of Death, a veritable meat grinder just south of Baghdad, the Black Hearts found themselves in arguably the country’s most dangerous location at its most dangerous time.

Hit by near-daily mortars, gunfire, and roadside bomb attacks, suffering from a particularly heavy death toll, and enduring a chronic breakdown in leadership, members of one Black Heart platoon—1st Platoon, Bravo Company, 1st Battalion—descended, over their year-long tour of duty, into a tailspin of poor discipline, substance abuse, and brutality.

Four 1st Platoon soldiers would perpetrate one of the most heinous war crimes U.S. forces have committed during the Iraq War—the rape of a fourteen-year-old Iraqi girl and the cold-blooded execution of her and her family. Three other 1st Platoon soldiers would be overrun at a remote outpost—one killed immediately and two taken from the scene, their mutilated corpses found days later booby-trapped with explosives.

Black Hearts is an unflinching account of the epic, tragic deployment of 1st Platoon. Drawing on hundreds of hours of in-depth interviews with Black Heart soldiers and first-hand reporting from the Triangle of Death, Black Hearts is a timeless story about men in combat and the fragility of character in the savage crucible of warfare. But it is also a timely warning of new dangers emerging in the way American soldiers are led on the battlefields of the twenty-first century.

JIM FREDERICK is a contributing editor at "Time" magazine. He was previously a "Time" senior editor in London and, before that, the magazine's Tokyo bureau chief. He is coauthor, with former Army Sergeant Charles Robert Jenkins, of "The Reluctant Communist: My Desertion, Court-Martial, and Forty-Year Imprisonment in North Korea." He lives in New York City.

"Riveting. . . A narrative that combines elements of 'In Cold Blood' and 'Black Hawk Down' with a touch of 'Apocalypse Now' as it builds toward its terrible climax....Frederick's extraordinary book is a testament to a misconceived war, and to the ease with which ordinary men, under certain conditions, can transform into monsters. . . . Extraordinary."
—New York Times Book Review

"Frederick, taking the story through to the surprising effect of the beheadings, the conclusion of the war crime trials and the impact that they had on the Iraqi relatives of the slain and the members of Bravo Company, tells the complex story in raw, compassionate and exact detail. Black Hearts should be taught at West Point, Annapolis, and wherever else the styles and consequences of combat leadership are studied."
—HuffingtonPost.com

“Gripping. . . . A model of extended reportage on a multifaceted subject.”
—Chicago Sun-Times

"BLACK HEARTS is a gripping account of a single incident involving some of the most despicable actions by U.S. soldiers since the My Lai massacre in Vietnam....It would be good for our nation and our military if the examples of bad leadership exposed by Jim Frederick in BLACK HEARTS become a subject of study in our military education system."
—Military Review

“Black Hearts shows how a broken system broke its men. . . . Engrossing and enraging, a chronology of combat and crime reported with compassion."
—Army Times

“Every military leader should read Black Hearts. With empathy and clear-eyed understanding, Frederick reveals why some men fail in battle, and how others struggle to redeem themselves. An absorbing, honest and instructive investigation into the nature of leadership under stress.”
—Bing West, author of The Village and The Strongest Tribe

"Intense. . . . Fast-paced and highly detailed, this volume is difficult to put down. "
—Publishers Weekly, starred review, "Pick of the Week"

"Frederick’s...compassion for all parties involved has enabled him to get an amount of cooperation from all of them that makes the book an exceptionally rich and valuable document of an aspect of the war the coverage of which is not always free from political bias or just plain sloppiness."
—Booklist

"Harrowing account of the atmospherics, commission and aftermath of a war crime. In March 2006, deployed in the south of Baghdad, the 1st Battalion, 502nd Infantry Regiment, 101st Airborne Division faced a countryside in uproar. Arguably the most dangerous spot in an extremely dangerous country, the Triangle of Death featured IEDs that made every Humvee ride “an exercise in terror” and a civilian population indistinguishable from the death-dealing armed militias. With too few men to mount proper patrols and suicide car bombings and videotaped beheadings circulating to instill an extra bit of horror, every soldier had to endure constant stress and resist hating the very people they were charged with protecting. Relying on scores of interviews with soldiers and Iraqis, journals, letters, classified reports and investigations, Frederick carefully reconstructs the events that led to the breakdown of 1st Platoon, Bravo Company, when four soldiers raped and killed an Iraqi girl and murdered her family. War atrocities, of course, are as old as Achilles’ rage, and why particular soldiers succumb to madness and surrender their honor, while others who have undergone the same hardships don’t, remains a mystery. Still, the author answers the questions he can, plumbing 1st Platoon’s psychological isolation, a consequence of having three of their leaders killed in a two-week period, the resulting disarray compounded by a leadership vacuum and by constant, invidious comparisons by senior officers with Bravo’s other platoons. Their heightened sense of self-pity, the belief that they faced unevenly distributed risks and the perceived disrespect or indifference of high command—all these factors created the conditions that led to an unspeakable crime. While never absolving the four perpetrators of their individual responsibility, Frederick makes clear that the atrocity had identifiable antecedents and spreads blame much wider than four out-of-control GIs. A riveting picture of life outside the wire in Iraq, where '[y]ou tell a guy to go across a bridge, and within five minutes he’s dead.'"
—Kirkus Reviews, starred review