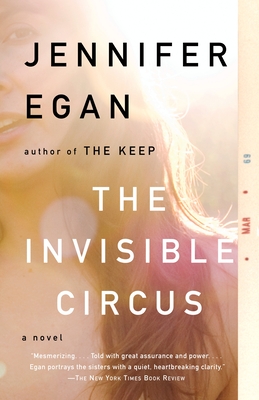 An emotionally rich story about surviving not only the early death of a father to leukemia but also the suicide of an older sister under unknown circumstances, The Invisible Circus is a coming of age story wrapped in the American and European counter culture of the late '60's and early '70's. It avoids most of the genre's cliches and deftly handles the rest. Egan is one of America's greatest writers-past or present, and you understand why as this story ends. - randy

In Jennifer Egan’s highly acclaimed first novel, set in 1978, the political drama and familial tensions of the 1960s form a backdrop for the world of Phoebe O’Connor, age eighteen. Phoebe is obsessed with the memory and death of her sister Faith, a beautiful idealistic hippie who died in Italy in 1970. In order to find out the truth about Faith’s life and death, Phoebe retraces her steps from San Francisco across Europe, a quest which yields both complex and disturbing revelations about family, love, and Faith’s lost generation. This spellbinding novel introduced Egan’s remarkable ability to tie suspense with deeply insightful characters and the nuances of emotion.

Jennifer Egan is the author of four novels: A Visit from the Goon Squad, The Keep, Look at Me, The Invisible Circus; and the story collection Emerald City. Her stories have been published in The New Yorker, Harper’s Magazine, GQ, Zoetrope, All-Story, and Ploughshares, and her nonfiction appears frequently in The New York Times Magazine. She lives with her husband and sons in Brooklyn.

“Mesmerizing. . . . Told with great assurance and power. . . . Egan portrays the sisters with a quiet, heartbreaking clarity.” —The New York Times Book Review“Wonderful. . . . Words glide through her fingers and enter the pores like cool San Francisco fog.” —Los Angeles Times Book Review“Brilliant in its authenticity and overwhelming passion.” —The Boston Globe“A trip that takes the reader through stunning emotional terrain.” —The New Yorker