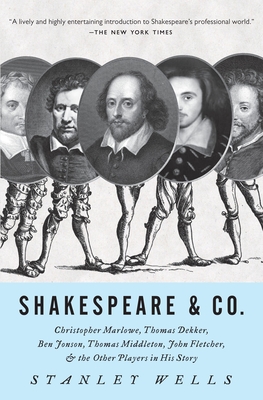 By Stanley Wells
Email or call for price
Special Order

From the dean of Shakespeare studies comes a lively, entertaining work of biography that firmly locates Shakespeare within the hectic, exilarating world in which he lived and worked.Theatre in Shakespeare's day was a growth industry. Everyone knew everyone else, and they all sought to learn, borrow, or steal from one another. Stanley Wells explores the theatre world from behind the scenes, examining how the great actors of the time influenced Shakespeare's work. He writes about the lives and works of the other major writers of the day and discusses Shakespeare's relationships-sometimes collaborative—with each of them. Throughout, Wells shares his vast knowledge of the period, re-creating and celebrating the sheer richness and variety of the social and cultural milieus that gave rise to the greatest writer in our language.

"A lively and highly entertaining introduction to Shakespeare's professional world." —The New York Times“[Wells] sets out with elegance and ease to chronicle Shakespeare's relationships with his fellow workers, that remarkable collection of actors and playwrights without whom there would not have been a golden age of English drama-or, Wells vigorously argues, Shakespeare as we know him.” —The Atlantic Monthly“Entertaining. . . . Highly readable. . . . Pulling Shakespeare back down among the mortals-especially entertaining ones such as Marlowe and Jonson-is a worthy undertaking.” —Richmond Times Dispatch