Voices from the Warsaw Ghetto: Writing Our History (Posen Library of Jewish Culture and Civilization) (Hardcover) 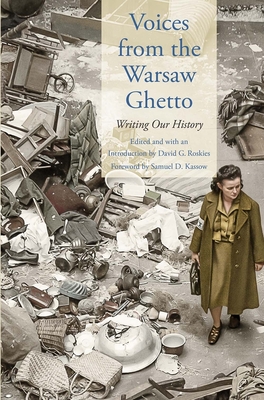 Hidden in metal containers and buried underground during World War II, these works from the Warsaw Ghetto record the Holocaust from the perspective of its first interpreters, the victims themselves. Gathered clandestinely by an underground ghetto collective called Oyneg Shabes, the collection of reportage, diaries, prose, artwork, poems, jokes, and sermons captures the heroism, tragedy, humor, and social dynamics of the ghetto. Miraculously surviving the devastation of war, this extraordinary archive encompasses a vast range of voices—young and old, men and women, the pious and the secular, optimists and pessimists—and chronicles different perspectives on the topics of the day while also preserving rapidly endangered cultural traditions. Described by David G. Roskies as “a civilization responding to its own destruction,” these texts tell the story of the Warsaw Ghetto in real time, against time, and for all time.

David G. Roskies is the Sol and Evelyn Henkind Chair in Yiddish Literature and Culture and professor of Jewish literature at the Jewish Theological Seminary, and is the author of Against the Apocalypse: Responses to Catastrophe in Modern Jewish Culture, which was awarded the Ralph Waldo Prize from Phi Beta Kappa.

Samuel D. Kassow is Charles H. Northam Professor of History at Trinity College. He is the author of Who Will Write Our History? and editor of In Those Nightmarish Days, by Peretz Opoczynski and Josef Zelkowicz.

“A compact, diverse anthology.”—C.P. Vincent, Choice
“Voices From the Warsaw Ghetto . . . is a book of unrelenting power. You read it the way you might burn through a fever: dizzied by its force, aware that you have no choice but to surrender to its grip."—Joseph Dorman, Brandeis Magazine
"This is the most important collection of surviving documents written by Jews during the Holocaust."—Karen Auerbach, University of North Carolina, Chapel Hill
“Samuel Kassow provides a moving foreword that conveys the spiritual task that united the group and its historical importance.”—Michael Berenbaum, American Jewish University
"A compelling anthological collection framed by an elegant introduction by David Roskies. The selections are powerful and gripping."—Deborah Dash Moore, University of Michigan