How Shakespeare Put Politics on the Stage: Power and Succession in the History Plays (Hardcover) 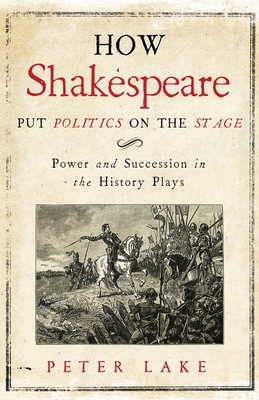 A masterful, highly engaging analysis of how Shakespeare’s plays intersected with the politics and culture of Elizabethan England

With an ageing, childless monarch, lingering divisions due to the Reformation, and the threat of foreign enemies, Shakespeare’s England was fraught with unparalleled anxiety and complicated problems. In this monumental work, Peter Lake reveals, more than any previous critic, the extent to which Shakespeare’s plays speak to the depth and sophistication of Elizabethan political culture and the Elizabethan imagination. Lake reveals the complex ways in which Shakespeare’s major plays engaged with the events of his day, particularly regarding the uncertain royal succession, theological and doctrinal debates, and virtue and virtù in politics. Through his plays, Lake demonstrates, Shakespeare was boldly in conversation with his audience about a range of contemporary issues. This remarkable literary and historical analysis pulls the curtain back on what Shakespeare was really telling his audience and what his plays tell us today about the times in which they were written.

Peter Lake is university distinguished professor of history, professor of the history of Christianity, and Martha Rivers Ingram Chair of History at Vanderbilt University. He divides his time between Nashville, TN, and London.

“Subtle and insightful readings . . . The high point of Mr. Lake’s book is his masterly analysis of Henry V. . . . Anyone interested in Shakespeare should make the effort to read this book. Even someone intimately familiar with the plays will discover much that is new, from details of historical background to interpretations of specific passages.”—Paul A. Cantor, Wall Street Journal

“The most detailed, insightful study of [this] topic yet . . . masterful . . . invites readers to a renewed appreciation for Shakespeare’s work—and the intricacies of the dramatist’s mind.”—Dana Huntley, British Heritage

“[Lake] enriches and expands our sense of Shakespeare’s political whereabouts over the course of the 1590s and into the last days of Elizabeth’s reign.”—Lee Oser, Library of Law and Liberty

“Comprehensive . . . inventive . . . [Lake] enriches our understanding both of Shakespeare as a political playwright and of the public sphere that englobes us still.”—Andrew S. Brown, Marginalia

“The lucid, lively, memorable prose, and location at the heart of so many major plays of a bleak and secular vision of reality typified by Machiavellian “commodity politics” compose a landmark work of liberative demystification.”—Chris Fitter, Modern Philology


“[How Shakespeare Put Politics on the Stage] is an accessible and deeply researched contribution to the conversation about an endlessly fascinating group of plays . . . this book is surely a notable critical landmark.”—David Womersley, Huntington Library Quarterly

“This large and intricate study will be of strong interest to literary scholars of Shakespeare and the early modern. . . . [Lake] communicates with unprecedented vividness the horror Elizabethans felt as they contemplated a future that seemed to portend endless war and uncertainty.”—Leah S. Marcus, Renaissance Quarterly

“At this moment, when English history plays are experiencing a comeback in the theatre, Lake’s book will be of value to scholars, students, and the general reader seriously interested in Elizabethan history based on scrupulous research.”—Goran Stanivukovic, Renaissance & Reformation

'An immensely learned and deeply insightful monograph disguised as a page-turner. Lake offers the most lucid and believable account to date of, as the title promises, how Shakespeare put politics on the stage. Required reading not only for all Shakespeareans but for anyone interested in how literature speaks to and is shaped by its historical moment.' - Debora Shuger, author of Political Theologies in Shakespeare's England

'Even as Shakespeare’s histories illuminate his times, his times cast light upon those plays. Peter Lake, whose grasp of the Elizabethan political scene is exceptional, illuminates both Shakespeare’s world and works. Historians and literary scholars alike will find this a deeply engaging and comprehensive study.'—James Shapiro, author of The Year of Lear: Shakespeare in 1606

'Peter Lake has written an astonishing book, even for Peter Lake. Learned, lively, provocative and often surprising, How Shakespeare Put Politics on the Stage is a brilliant account of Elizabethan politics and Shakespeare’s extraordinary mediation of them. It is a wonderfully sensitive and supple work of literary criticism as well as a deeply engaged account of how Shakespeare’s England (which only retrospectively became “his”) thought about the most urgent political issues of the day.' - David Scott Kastan, author of A Will to Believe: Shakespeare and Religion