We hosted an event with this author
2 years 10 months ago
3 years 9 months ago
Check here for a signed copy or email us at info@left-bank.com.

Almost Nothing To Be Scared Of (Wisconsin Poetry Series) (Paperback) 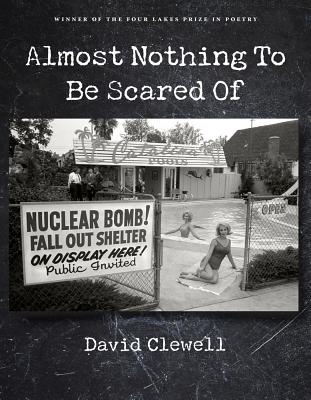 Full of Clewell’s distinctive blend of narrative and lyric, as well as his unabashed, idiosyncratic sense of wonder, these poems often spring from unlikely sources: Adam and Eve’s Paradisal do-over at the Jersey shore, the misguided promise of tinfoil hats, Uncle Bud on the Moon, Debbie Fuller on Pluto, debatable Bigfoot nomenclature, Richard Nixon’s social-media rejuvenation, and a Nebraska policeman’s run-in with space aliens who tell him, “We want you to believe in us—but not too much.”
In Almost Nothing To Be Scared Of, David Clewell’s most expansive work yet, readers will discover a multiplicity of new ways to take heart—surely no small thing in a world where we’re too often asked to take what we’d rather not.

David Clewell is the author of a dozen books of poetry, including Taken Somehow by Surprise, The Low End of Higher Things, Now We’re Getting Somewhere, Jack Ruby’s America, and Blessings in Disguise. He is a former poet laureate of Missouri and also formerly a circus laborer, professional weight guesser, and professional wrestler. He currently labors as a professor of English and director of the creative writing program at Webster University in Saint Louis.

“David Clewell’s lopsided wit and keen observations on the spectacle of American culture deserve a gang of listeners for the truth of his insights and the sheer fun of the delivery. By the way, did you know that the Inverted Atomic Drop was a wrestling move? With this book in hand, you’ll learn that and more.”—Billy Collins

“Big fun from beginning to end. Clewell’s lanky, extravagant, gimlet-eyed poems would make Ulysses ask to be tied to the mast again, they’re that seductive. This collection not only provides a place to catch our breath but it administers CPR to any disheartened reader.”—Ron Koertge

“Clewell writes poems of every length, from two liners that are precise as lasers, to monsters that crawl over page after page. These are beautiful monsters. . . . These poems pulsate with stories we need to hear.”—Today’s Book of Poetry