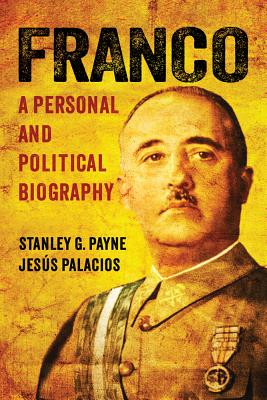 General Francisco Franco ruled Spain for nearly forty years, as one of the most powerful and controversial leaders in that nation's long history. He has been the subject of many biographies, several of them more than a thousand pages in length, but all the preceding works have tended toward one extreme of interpretation or the other. This is the first comprehensive scholarly biography of Franco in English that is objective and balanced in its coverage, treating all three major aspects of his life—personal, military, and political. The coauthors, both renowned historians of Spain, present a deeply researched account that has made extensive use of the Franco Archive (long inaccessible to historians). They have also conducted in-depth interviews with his only daughter to explain better his family background, personal life, and marital environment, as well as his military and political career.
Franco: A Personal and Political Biography depicts his early life, explains his career and rise to prominence as an army officer who became Europe's youngest interwar brigadier general in 1926, and then discusses his role in the affairs of the troubled Second Spanish Republic (1931–36). Stanley G. Payne and Jesús Palacios examine in detail how Franco became dictator and how his leadership led to victory in the Spanish Civil War that consolidated his regime. They also explore Franco's role in the great repression that accompanied the Civil War—resulting in tens of thousands of executions—and examine at length his controversial role in World War II. This masterful biography highlights Franco's metamorphoses and adaptations to retain power as politics, culture, and economics shifted in the four decades of his dictatorship.

Best Books for General Audiences, selected by the American Association of School Librarians

“An important book, destined to elicit a heated academic debate surrounding the man who ruled Spain for forty years and whose figure still casts a long shadow four decades after his death.”—Journal of Modern History

Stanley G. Payne is the Hilldale–Jaume Vicens Vives Professor of History Emeritus at the University of Wisconsin–Madison and the author of many books, including A History of Fascism, 1914–1945; The Franco Regime, 1936–1975; and Spain: A Unique History. Jesús Palacios is a noted historian, investigative journalist, and adjunct professor at the University of Madrid.

"An intimate portrait of Franco the man, provoking a lively and necessary debate about the nature of the dictator's regime."—Julius Ruiz, author of Franco's Justice


"Francisco Franco is the only major twentieth-century dictator to die peacefully in his bed—after almost four decades in power. His regime was brutal, despicable, and in many respects ineffectual, yet it did not join the Axis powers in World War II and was a transitional type between traditional military dictatorships and more recent totalitarian regimes. This book, impeccably based on the available sources and displaying sober judgment, could well be the definitive work on the subject."—Walter Laqueur, author of Fascism: Past, Present, Future


"Masterfully combines research on Franco's life and regime with new and unique sources including Franco's private papers and interviews with Franco's only daughter. It will appeal to a broad readership including anyone interested in the history of twentieth-century Spain, the Spanish civil war, and the Franco regime."—Joan Maria Thomàs, University Rovira-Virgili, Spain

“This highly readable and extremely insightful biography situates Franco not only in his Spanish context but also in the global context of 20th-century dictatorships.”—Wall Street Journal

“The authors face their daunting task with redoubtable advantages [including] the respect due to their scholarship and erudition. . . . To write fairly about Franco is a largely thankless, albeit perhaps remunerative, task, appealing only to those who have a stomach for a fight or indifference to blows. . . . Stanley Payne and Jesús Palacios deserve admiration for taking the risk of saying what little there is to be said on their subject’s behalf. Theirs is a fearless book.”—Times Literary Supplement


“Add[s] an intimate glimpse into Franco’s personal and family life to the extant historiography of Franco’s military career and the political machinations of his regime. . . . The authors successfully take great pains to be objective and balanced as they simultaneously eschew writing a hagiography and situating his seizure of the state within the context of interwar chaos and violence. Recommended, all levels/libraries.”—Choice


“Franco is that dread thing, ‘complex.’ He will frustrate a desire for black-and-whiteness. . . . The new biography by Stanley G. Payne and Jesús Palacios will tell you what to think about Franco. Even better, it will tell you how to think about him. That is a huge gift to an interested reader.”—National Review


“Highly readable, the book is at its heart a biography. . . . The authors do well to demonstrate not only Franco’s committed anti-Communism, but his elaborate and exaggerated fear of Freemasons, his reluctance for reform, his growing disillusionment with the Roman Catholic Church after Vatican II, and his sheer inability to comprehend economic policy.”—American Historical Review