Celluloid Activist: The Life and Times of Vito Russo (Hardcover) 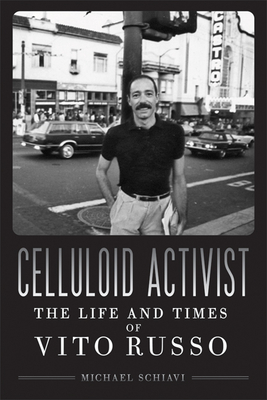 Celluloid Activist is the biography of gay-rights giant Vito Russo, the man who wrote The Celluloid Closet: Homosexuality in the Movies, commonly regarded as the foundational text of gay and lesbian film studies and one of the first to be widely read.
But Russo was much more than a pioneering journalist and author. A founding member of the Gay and Lesbian Alliance Against Defamation (GLAAD) and cofounder of the AIDS Coalition to Unleash Power (ACT UP), Russo lived at the center of the most important gay cultural turning points in the 1960s, 1970s, and 1980s. His life as a cultural Zelig intersects a crucial period of social change, and in some ways his story becomes the story of a developing gay revolution in America. A frequent participant at “zaps” and an organizer of Gay Activists Alliance (GAA) cabarets and dances—which gave the New York gay and lesbian community its first social alternative to Mafia-owned bars—Russo made his most enduring contribution to the GAA with his marshaling of “Movie Nights,” the forerunners to his worldwide Celluloid Closet lecture tours that gave gay audiences their first community forum for the dissection of gay imagery in mainstream film.            Biographer Michael Schiavi unravels Vito Russo’s fascinating life story, from his childhood in East Harlem to his own heartbreaking experiences with HIV/AIDS. Drawing on archival materials, unpublished letters and journals, and more than two hundred interviews, including conversations with a range of Russo’s friends and family from brother Charlie Russo to comedian Lily Tomlin to pioneering activist and playwright Larry Kramer, Celluloid Activistprovides an unprecedented portrait of a man who defined gay-rights and AIDS activism.

“Schiavi tells a compelling story in this biography—from his re-creation of life on the streets of East Harlem and in Greenwich Village of the 1960s and 1970s to the way he conveys Russo’s excitement about his film research and popular education to his account of the AIDS years in New York City.”—John D’Emilio, Italian American Review

“In [Schiavi’s] hands Russo’s life is both fascinating in its own right and a window into a larger milieu of activism during two critical decades.”—Italian American Review
Best Special Interest Books, selected by the American Association of School Librarians

Michael Schiavi is associate professor of English and coordinator of English as a second language at New York Institute of Technology’s Manhattan campus. His articles have appeared in Cinema Journal, Theatre Journal, Modern Drama, and College Literature.

“My dear friend, Vito Russo, was a darling and a daring man; more important, he was a giant in the fields of gay and AIDS activism. In Celluloid Activist, Michael Schiavi recounts Vito’s full life, starting with a New York childhood that Martin Scorsese might have written, through Vito’s penning of the indispensable Celluloid Closet, the first major study of gays and lesbians in film, and finally through Vito’s tireless work as an AIDS activist. All this, plus a look at Vito up a tree (literally) at the Stonewall Riots! Celluloid Activist is a long-overdue examination of a man who helped put gay rights on the map. In the words of Edith Ann, one of Vito’s other good buddies, ‘And that's the truth-h-h-h!’”—Lily Tomlin

“This important book brings both an era and its sensibilities to life by engagingly telling the story of a major gay civil rights activist. Russo’s contribution to the movement for gay equality through practically inventing the field of LGBT film history is enormous. Readers will find themselves inspired by Russo’s unflagging courage, passion, and downright tenacity.”—David Carter, author of Stonewall: The Riots That Sparked the Gay Revolution

“Schiavi is thorough and compelling both in bringing this complex character to life and in delineating the people and events that shaped him. Highly Recommended.”—CHOICE

“A dynamic, emotional, and fascinating look at the life of the spellbinding gay activist Vito Russo.”—Craig Zadan, producer of Chicago and Hairspray

“Schiavi demonstrates a knack for digging deep into his subject matter. His immersion into the heart, soul, and benevolent machinations of Russo’s perseverant fight for homosexual justice is beautifully on display in this comprehensive biography and illuminating time capsule that will hopefully garner Vito Russo a more visible place in the gay rights movement.”—Bay Area Reporter

“In Celluloid Activist, Vito Russo has the biography he deserves, one that matches his energy level.”—South Florida Gay News

“Celluloid Activist realigns Russo’s legacy, positioning his politics and film scholarship on twin pedestals. It is nothing if not thorough; Schiavi conducted almost 200 interviews. Celluloid Activist has so many direct quotes from Russo, his friends and family that it reads like a memoir. It’s leavened with details both novelistic and cinematic, and could make a compelling film. You can almost hear Vito casting his own biopic, giggling as he ponders which movie star hunk should play the funny-serious little boy from East Harlem.”—San Francisco Chronicle

“Celluloid Activist: The Life and Times of Vito Russo, Michael Schiavi’s new biography of the noted LGBT activist and film historian, is an important addition to queer and film scholarship. It is also one of the most complex and compelling historical narratives of gay male life and culture in the later decades of the twentieth century. . . . Schiavi beautifully maps out Russo’s growth as a political gay man—a path that was neither as obvious or clear-cut as it mat at first appear—and the book seamlessly demonstrates how the growth of gay male culture during this time was inextricably intertwined with the emergence of series of overlapping, sometimes conflicting, LGBT political movements.”—Michael Bronski, Cineaste