The Journalist of Castro Street: The Life of Randy Shilts (Paperback) 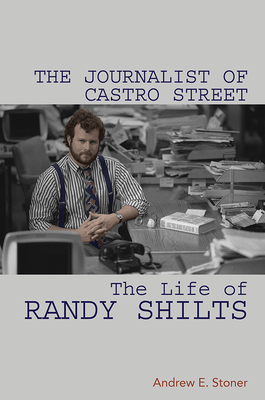 As the acclaimed author of And the Band Played On, Randy Shilts became the country's most recognized voice on the HIV/AIDS epidemic. His success emerged from a relentless work ethic and strong belief in the power of journalism to help mainstream society understand not just the rising tide of HIV/AIDS but gay culture and liberation.In-depth and dramatic, Andrew E. Stoner's biography follows the remarkable life of the brash, pioneering journalist. Shilts's reporting on AIDS in San Francisco broke barriers even as other gay writers and activists ridiculed his overtures to the mainstream and labeled him a traitor to the movement, charges the combative Shilts forcefully answered. Behind the scenes, Shilts overcame career-threatening struggles with alcohol and substance abuse to achieve the notoriety he had always sought, while the HIV infection he had purposely kept hidden began to take his life.Filled with new insights and fascinating detail, The Journalist of Castro Street reveals the historic work and passionate humanity of the legendary investigative reporter and author.

"A major contribution to gay history." --Booklist
"A serious account of the life of one of the twentieth century’s most divisive gay figures." --Times Literary Supplement

"A sympathetic, first-rate narrative of one of the most notable journalists of our time. Stoner captures the passions and imperfections of both the fearless writer and the gay-rights crusader."--Patrick Lee Plaisance, author of Virtue in Media: The Moral Psychology of Excellence in News and Public Relations

"The Journalist of Castro Street is a moving biography of a journalist and his life's work. . . . This is an excellent piece of writing." --Seattle Book Review

"The Journalist of Castro Street is the result of copious research and interviewing." --The Gay & Lesbian Review

"[In The Journalist of Castro Street] we get to discover Shilts, as if in real time, as he discovers himself, one page at a time." --A&U Magazine