We hosted an event with this author
3 days 2 hours ago
Check here for a signed copy or email us at info@left-bank.com. 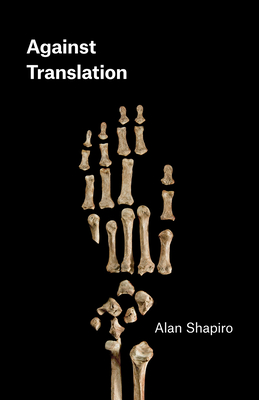 We often ask ourselves what gets lost in translation—not just between languages, but in the everyday trade-offs between what we experience and what we are able to say about it. But the visionary poems of this collection invite us to consider: what is loss, in translation? Writing at the limits of language—where “the signs loosen, fray, and drift”—Alan Shapiro probes the startling complexity of how we confront absence and the ephemeral, the heartbreak of what once wasn’t yet and now is no longer, of what (like racial prejudice and historical atrocity) is omnipresent and elusive. Through poems that are fine-grained and often quiet, Shapiro tells of subtle bereavements: a young boy is shamed for the first time for looking “girly”; an ailing old man struggles to visit his wife in a nursing home; or a woman dying of cancer watches her friends enjoy themselves in her absence. Throughout, this collection traverses rather than condemns the imperfect language of loss—moving against the current in the direction of the utterly ineffable.

Alan Shapiro has published many books, including Reel to Reel, which was a finalist for the Pulitzer Prize. A member of the American Academy of Arts and Sciences, he is the William R. Kenan Jr. Distinguished Professor of English and comparative literature at the University of North Carolina at Chapel Hill.

"The usual complaint about translation is linguistic. Something is lost going from one language to another. Shapiro’s concern is bigger. He writes pictorial and dramatic poems packed with recollection, interpretation, characterization, and penetration . . . an eminently rereadable collection."
— Booklist

"Shapiro goes back to his growing years, and younger life, to find what was lost. Friends die, parents disconnect — first love, first awareness, first ambition — these amplify, but cannot replace, the moment before they happened; and that’s where the void is — one that can never be filled. The poet’s voice cuts through story, making the past current, being harmonious with sorrow, never writing a dull moment; presenting a reality, beautifully stated, that’s truly virtual before that word became co-opted."
— Washington Independent Review of Books

"A friend of mine says that an Alan Shapiro collection is like a novel within a series of novels that tell you what it is like to be a person in a culture and from a family. I think that is true, as Alan Shapiro is also a real stylist because he has to be one. Any poet whose work offers novelistic pleasures and insights, working with the unlovely and anti-poetic aspects of life while writing true to the compression and elegance of lyric poetry, has to be a stylist. . . . Poets like Alan Shapiro, who are writing in this responsible, responsive, fearless and disillusioned or generous way, seem important to me if we are going to get to the bottom of the lousy and destructive ways we conceptualize adulthood and personhood in terms of perfection and ambition."
— On the Seawall

“In our difficult times, the need for poetry becomes a hunger. Few living poets speak to our need as deftly and powerfully as Alan Shapiro. Searing, hauntingly sad, often hilarious, these poems—about childhood, aging, the ‘berserk debris’ that our violence leaves in its wake, the way the age-old laws of masculinity banish laughter—reconnect the circuits of the soul, overcharged by its daily news-diet of hatred and polarization.”
— Martha C. Nussbaum, University of Chicago

"Beginning with the fall of towers and ending with the emergence of a new voice, the mastery of Against Translation is clear."
— The Columbia Review

"Shapiro has always been good at the long view without losing sight of the immediate and poignant. The scrupulosity of his vision, with its journalistic emphasis on the exact details, can be merciless, even cruel, though never so much as when turned on himself. . . . He writes with a satirist’s eye about himself and his family, but the effect is not satirical. Rather it is rueful, heartbreaking, and with the same vision he employs for a convict’s suicide or drinking buddies in a Dublin bar during the Troubles."
— The Hudson Review