Message to Our Folks: The Art Ensemble of Chicago (Hardcover) 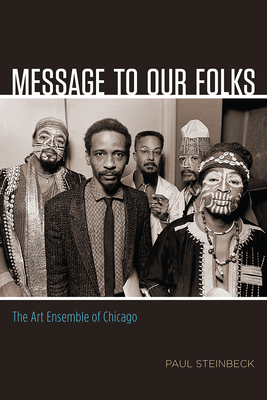 Message to Our Folks: The Art Ensemble of Chicago (Hardcover)


Special Order
This year marks the golden anniversary of the Art Ensemble of Chicago, the flagship band of the Association for the Advancement of Creative Musicians. Formed in 1966 and flourishing until 2010, the Art Ensemble distinguished itself by its unique performance practices—members played hundreds of instruments on stage, recited poetry, performed theatrical sketches, and wore face paint, masks, lab coats, and traditional African and Asian dress. The group, which built a global audience and toured across six continents, presented their work as experimental performance art, in opposition to the jazz industry’s traditionalist aesthetics.

In Message to Our Folks, Paul Steinbeck combines musical analysis and historical inquiry to give us the definitive study of the Art Ensemble. In the book, he proposes a new theory of group improvisation that explains how the band members were able to improvise together in so many different styles while also drawing on an extensive repertoire of notated compositions. Steinbeck examines the multimedia dimensions of the Art Ensemble’s performances and the ways in which their distinctive model of social relations kept the group performing together for four decades. Message to Our Folks is a striking and valuable contribution to our understanding of one of the world’s premier musical groups.
Paul Steinbeck is associate professor of music at Washington University in St. Louis. He is the author of Message to Our Folks: The Art Ensemble of Chicago and coauthor of Exercises for the Creative Musician.

“Steinbeck has produced a major contribution to both music theory and the burgeoning field of critical improvisation studies, showing academic and lay readers alike how these boundary-shattering African-American artists realized their ambitious dreams, not only in sound, but through alternative communities of affect and agency that transformed experimentalism itself.”
— George E. Lewis, author of A Power Stronger Than Itself: The AACM and American Experimental Music

“This is a crucial work of scholarship, one that’s been a long time coming. The Art Ensemble of Chicago were a once in a lifetime phenomenon; a book this passionate and informed is the least they’ve earned.”
— The Wire

“Illuminating. . . . Steinbeck’s Message to Our Folks demonstrates how well the band succeeded on their own terms. They made just the uncompromising music they wanted to, and they made it pay.”
— Kevin Whitehead, Fresh Air

“The book contains a wealth of information and original interviews. It is a very easy read, well written and clear throughout. . . . The chapters dedicated to musical analyses are lush with detail. Through transcriptions, diagrams, and highly detailed writing, Steinbeck conveys the depth and creativity that goes into each Art Ensemble performance. The illustrations in these chapters are extensive. These three chapters alone are worth the price of the book. . . . An essential read for anyone interested in the Art Ensemble of Chicago or creative music.”
— Free Jazz Collective

“Message to Our Folks calls attention to just how staggering an achievement the Art Ensemble of Chicago accomplished.”
— PopMatters

“A thorough, learned, yet consistently readable account of one of the most long-lived and successful bands in the music. Mixing a wealth of biographical detail and an entertaining history of the band’s rise to international fame with close musical analysis of three key recordings, Message to Our Folks perfectly captures the band’s unique ethos by examining its roots in the Association for the Advancement of Creative Musicians; its experimentation with multi-media performance art; its travels around the world, most importantly to 1970s Paris but subsequently to places such as Nigeria, Jamaica and Japan; its theory of group improvisation; and its pioneering approach to social relations. In short, this is a model study of one of the most influential bands in creative music.”
— London Jazz News

“A much-needed look at the genius of The Art Ensemble Of Chicago—one of the coolest, most compelling groups to emerge in the great wave of avant jazz in the late 60s—and one who continued to give the world a lifetime legacy of groundbreaking music! There's been plenty written on the group over the years, but author Paul Steinbeck really takes things further—by bringing his own musicological training to play with the performances of the group—expanding our understanding of their sounds with rich interpretation of key moments—balanced out nicely by a fuller history of the group and its individual members—and their importance both on the American and global jazz scenes during the 60s, 70s, and 80s.”
— Dusty Groove

“A fine and minutely researched history. . . . It’s more than just a standard biography. Steinbeck—a bassist, composer, and professor of music—also devotes several chapters to microscopically detailed, moment-by-moment analysis of key recordings, including 1969’s A Jackson In Your House and Live at Mandel Hall, recorded in 1972. Here, his painstaking and innovative musical transcriptions reveal both the complexity of the Ensemble’s compositions and the astonishing, spontaneous group-think that made their improvisations so thrilling.”
— Jazzwise

“An absolutely engrossing entry-level read about a group that is still timely in the way that, say, Lester Bowie namesake David Bowie is—visually, thematically, sonically—and always deserving of another look.”
— Orlando Weekly

“Message to Our Folks, Steinbeck’s new history of the Art Ensemble of Chicago, the collective’s flagship band, vividly illustrates the AACM’s core value of interdependent creative practice. The Art Ensemble was a model of the AACM’s musical, cultural, and economic philosophy, and in the course of its career became one of the longest-lived and most celebrated experimental music groups in history. In this first comprehensive work on the Art Ensemble, Steinbeck evokes the adventurousness, range of expression, and sheer verve of these five virtuosos who, clad in African body paint, shamanistic garb, professorial jackets, and white lab coats, circled the globe playing—according to their motto—‘Great Black Music, Ancient to the Future.’”
— South Side Weekly

“An excellent work that deepens our our understanding of a unique and outstanding group of musicians. . .A well-researched, detailed study.”
— Jazz & Culture

“Because the music and, most importantly, the collective politics and practices of the AACM, the Art Ensemble of Chicago, and the Black Artists Group are so ludicrously under-studied, Steinbeck’s contribution remains invaluable.”
— Black Critical and Cultural Theory

"Paul Steinbeck's fine new biography of the band is a scholarly, forensic study. . . .  A fairly brief, fairly serious but highly effective biography, a must for general fans."
— Moving the River

“Steinbeck’s Message To Our Folks is the first book-length study of the Art Ensemble of Chicago. The author has produced an absorbing and highly original account of the group’s origins on the Southside of Chicago, the social and political implications of their move to Paris in 1969, and their subsequent return to the United States in 1971, along with innovative musicological analyses of the group’s most influential compositions and recordings. By taking us into the inner life of the Ensemble, Steinbeck eloquently demonstrates the ways in which the group’s lifelong engagement with multiple African-American, avant-garde, non-Western, and popular musical traditions was manifested in their unique sound, as well as explaining how and why they gained such a large and diverse following among audiences throughout the world. This is an important addition to jazz scholarship.”
— Nicholas Gebhardt, author of Going for Jazz: Musical Practices and American Ideology

“Message to Our Folks is a strong, interesting, thoroughly-researched, and beautifully written study of a pivotal group in jazz history—The Art Ensemble of Chicago. Combining narrative history and extended analysis of exemplary work by the group, the book is sure to find a significant audience among jazz scholars and the band’s broad, international fan base.”
— Gabriel Solis, author of Thelonious Monk Quartet with John Coltrane at Carnegie Hall

“Message to Our Folks is an important volume that expands our understanding of the musical practices and history of one of the leading experimental music groups of the last half of the twentieth century. A major highlight of this book is Steinbeck’s musical analyses and the ways he connects the music to the book’s wider themes of the Art Ensemble’s social practices. Steinbeck bolsters this with the use of primary sources drawn from the personal archives of the Art Ensemble alongside interviews with and personal insights from the Art Ensemble. Steinbeck’s integration of these sources into his book supply an additional layer of nuance and can be viewed as part of the recent turn toward the archive in jazz studies. Steinbeck’s work also demonstrates the value of a single-subject monograph, especially on artists whose polyvalent musical and social practices cannot be contained within specific critical theories or methodologies. Overall, Message to Our Folks will be of interest to general music audiences and interdisciplinary scholars of music, sound, performance, improvisation, and composition.”
— Journal of the Society for American Music

“A Seminary Coop Notable Book of the Year”
— /

“A Seminary Coop Notable Book of the Year”
— /