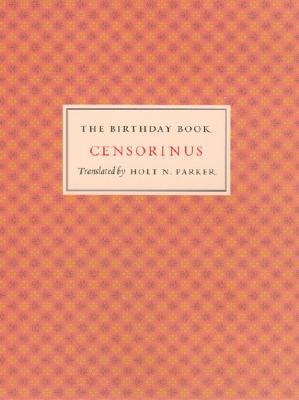 By Censorinus, Holt N. Parker (Translated by)
Email or call for price
Out of Print

Nearly 2,000 years ago, the Roman scholar Censorinus bestowed upon his best friend a charming birthday present: The Birthday Book, which appears here in its long-awaited first English translation. Laying out everything he knew about birthdays, the book starts simply, but by the conclusion of this brief yet brilliant gem, Censorinus has sketched a glorious vision of a universe ruled by harmony and order, where the microcosm of the child in the womb corresponds to the macrocosm of the planets. Alternately serious and playful, Censorinus touches on music, history, astronomy, astrology, and every aspect of time as it was understood in third-century Rome. He also provides ancient answers to perennial questions: Why does the day begin at midnight? Where did Leap Year come from? Which came first, the chicken or the egg?

Embodying the proverbial gift that keeps on giving, The Birthday Book has long been treasured by scientists, poets, and scholars, and Holt Parker’s graceful and lively new translation—accompanied by an illuminating introduction and detailed notes—is itself a present for Latinists, historians of science, and anyone looking for an unusual birthday gift.

Holt Parker is professor of classics at the University of Cincinnati.

“It was already incredible enough that English-language readers would have to wait until the twenty-first century for a complete translation of a book by an author so important to the history of science that he has a crater on the moon named after him. But it was just as incredible that, after the long wait, Censorinus would have the good fortune to fall into the hands of Holt Parker, whose crisp rendering of the original Latin is ingenious and lovingly accurate.”

“Holt Parker has succeeded in spades with this translation. It will appeal not only to scholars of history, literature, and the history of science, but also to anyone interested in the details of Roman life, attitudes, and perspectives on the world.”
— Joseph Pucci, Brown University

"In The Birthday Book, Censorinus distils the wisdom of several strains of philosophy, extracting whatever seems to have any bearing on births, days and birthdays: theories of the origin of the human species, the formation of the individual foetus, the principles of astrology, the ages of man, the nature of time, eons, centuries, years, months, days and hours. . . . Parker’s useful notes expand on Censorinus’ references and fill in the gaps."
— Thomas Jones

"Among birthday gifts, even of the quirkily unique kind, the treatise De die natali by the 3rd-century AD writer Censorinus still must be among the top ten for both idiosyncrasy and learning—a feat that even landed its author a place on the moon, where a crater is named after him. . . . Holt Parker and the University of Chicago Press have entered into the spirit of this enterprise nicely. The book is produced handsomely in small format, and the text is interspersed with some helpful diagrams and illustrations. In addition, there is a useful glossary and notes that do not smother. Most important, Parker well catches the various moods of [The Birthday Book]."
— Karl Galinsky

"Very good fun. . . . Full of gloriously pointless information and with useful notes attached, it makes perfect bed-time reading that will relieve you of any postmodern intellectual anxieties that you may be feeling."
— Journal of Classical Teaching

"As anyine who has worked on matters calendrical in the Greek and Roman worlds will know, the Birthday Book is a mine of information. . . . More people should certainly find Censorinus valuable and this excellent translation will assist in the wider dissemination of the text."
— Robert Hannah