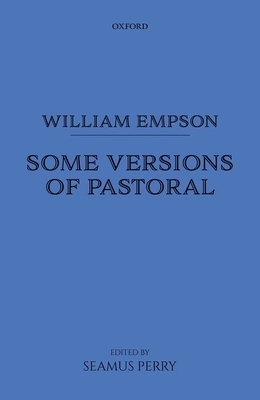 William Empson is, alongside T. S. Eliot, the greatest genius among twentieth-century critics, and Some Versions of Pastoral is widely recognised as one of the most extraordinary works of the golden age of English literary criticism. Ranging with astonishing virtuosity between works of several
centuries and moving purposefully between cultures, William Empson has dazzling things to say here about Shakespeare and the Elizabethan theatre, the political poetry of Marvell, Milton's Paradise Lost, the complex satire of John Gay's Beggar's Opera, and the convoluted psychology at work in the
Alice books of Lewis Carroll. The book is alert to questions of politics, psycho-analysis, and anthropology, and speaks to a wide range of contemporary concerns. Written in Empson's charismatically informal and wonderfully approachable voice, the book appeared in 1935 without footnotes or
references. This edition is the first to identify the quotations and allusions, to explain the pertinence of his references, and to place the work within its Empsonian context. It is published with an appendix of other texts by Empson which illuminate the issues at work in the book.

William Empson William Empson (1906-1984), poet, critic and essayist, is most famous for his first book, Seven Types of Ambiguity, begun while he was in Cambridge undergraduate. After a stint teaching in Japan and China, he worked for the BBC throughout the Second World War, afterwards returning to China for alonger stay. He was a professor of the University of Sheffield between 1952 and 1971, and was knighted in 1979. His other notable works include The Structure of Complex Words and Milton's God. Collected Poems was published in 1955, and his Complete Poems was published in 2000 by the Penguin Press Seamus Perry is Professor of English Literature and Massey Fellow, Balliol College, Oxford. His publications include Coleridge and the Uses of Division and Coleridge's Notebooks: A Selection, and, co-edited with Robert Douglas-Fairhurst, Tennyson Among the Poets (all OUP).