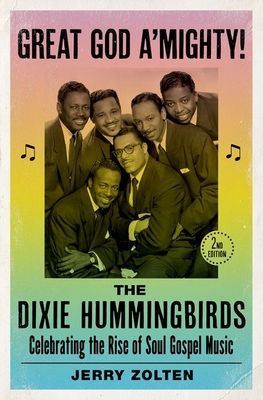 
On Our Shelves Now
The venerable Dixie Hummingbirds stand at the top of the black gospel music pantheon as artists who not only significantly shaped that genre but, in the process, also profoundly influenced emerging American pop music genres from Rhythm & Blues and Doo-Wop to Rock 'n' Roll, Soul, and Hip-Hop.
Great God A'Mighty The Dixie Hummingbirds shows how, in a career spanning more than nine decades, they pointed the way from pure a cappella harmony to guitar-driven soul to pop-stardom crossover, collaborating with artists like Stevie Wonder and Paul Simon along the way. Drawing on interviews with
founding and quintessential members as well as many of the pop luminaries influenced by the Hummingbirds, author Jerry Zolten tells their story from rising up and out of the segregated South in the twenties and thirties to success on Philadelphia radio and the New York City stage in the forties to
grueling tours in the fifties and over the long haul a brilliant recording career that carried well over into the 21st century. The story of the Dixie Hummingbirds is a tale of determined young men who navigated the troubled waters of racial division and the cutthroat business of music on the
strength of raw talent, vision, character, and perseverance, and made an indelible name for themselves in American cultural history. This heavily edited 2nd edition features brand new photographs, expanded historical context, and a full new chapter on the Hummigbirds' trajectory up to the 21st
century.

Jerry Zolten, Professor of Communication Arts & Sciences and Integrative Arts at The Pennsylvania State University, Altoona, is an educator, author, music and film producer, and screen and broadcast narrator. He writes extensively about American roots and vernacular music as both communication aboutculture and as an influence on contemporary pop music. Zolten's association with The Dixie Hummingbirds began during the late 1980s, initially as a producer of concert and festival appearances, then later as a chronicler of the group's history, culminating in the First Edition of Great God A'Mighty! The Dixie Hummingbirds: Celebrating the Rise of SoulGospel Music (2003). Zolten contributed liner notes for the Grammy-winning two-volume The Rise and Fall of Paramount Records, Volumes 1 & 2 from Jack White's Third Man Records. He is also a principle on-screen narrator in the film The Ballad of the Dreadnought, and co-producer and principle narrator of the documentaryfilm How They Got Over: Gospel Quartets and the Road to Rock 'n' Roll.