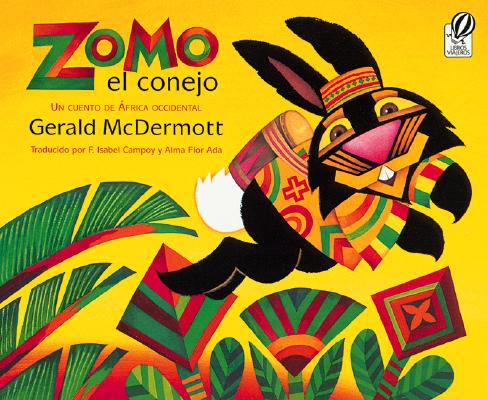 From Caldecott Award-winning author-illustrator Gerald McDermott's collection of Trickster Tales comes the story of Zomo the rabbit. . . . He is not big. He is not strong. But he is very clever!

GERALD MCDERMOTT (1941-2012) was an internationally acclaimed author-illustrator and the creator of numerous award-winning books and animated films for children. Winner of the Caldecott Medal and two Caldecott Honors for his picture books, he was also a consultant to the Joseph Campbell Foundation on mythology in education. His acclaimed series of trickster tales consists of Raven (a Caldecott Honor Book), Zomo the Rabbit, Coyote, Jabuti, Pig-Boy, and Monkey, each of which draws from the folktale traditions of a different part of the world. www.geraldmcdermott.com

F. Isabel Campoy is the author, translator, or anthologist of numerous books in the areas of poetry, theater, fictional narrative, biography, art, and bilingual education. She has been recognized with the Laureate Award from the San Francisco Public Library, the Reading the World Award, and many others. The California Association of Bilingual Education (CABE) has created an award in her name. She is a frequent speaker at national and international conferences on issues of transformative education, second language acquisition, and authentic writing. She lives in Northern California. Visit her at isabelcampoy.com and on Twitter at @fisabelcampoy.

THE ACADEMY OF NUTRITION AND DIETETICS, formerly the American Dietetic Association, is the largest group of food and nutrition professionals in the world. As the advocate of the dietetic profession, the Academy serves the public by promoting optimal nutrition, health, and well-being.

Praise for the original picture book:

"Wildly exuberant, full of slapstick and mischief, this . . . is a storyteller's delight."--Booklist (starred review)
"Features bold, vibrant shapes and hues . . . Dazzling."--Publishers Weekly (starred review)
"With its small but triumphant hero . . . , its dazzling design, and its great good humor, this story [is] a pleasure to use with children."--School Library Journal (starred review)