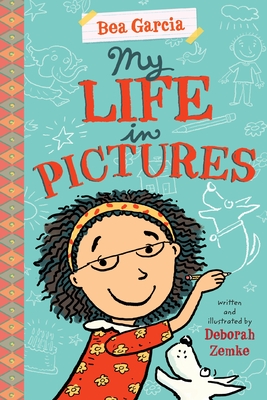 This is book number 1 in the Bea Garcia series.

Bea Garcia is an artist. She draws anywhere and everywhere—but mostly in her own notebook.  When Bea’s first and only best friend Yvonne moves to Australia, not even drawing makes Bea feel better. And things only get worse when a loud, rambunctious boy moves in next door. He’s nothing at all like Yvonne! But with a little imagination and a whole lot of doodles, Bea Garcia might just make a new friend.

This first book in a brand-new chapter book series is a must-read for doodlers everywhere.
Deborah Zemke has written and illustrated many books for young readers, including the wildly successful Doodles place mat series. Her work has also appeared in several magazines. She is also the designer of the ITC Zemke Hand font.

Praise for My Life in Pictures:

* "Bea Garcia is an honest and funny protagonist with whom readers will identify and want to check back with regularly."—School Library Journal, starred review

"There isn't anything real or imaginary that the endearing Bea cannot draw . . . Readers will find inspiration to write, draw, explore, and imagine."—Kirkus Reviews

"[Zemke] clearly shows how art, self-expression, and humor can be solid allies when life doesn’t go as planned."—Publishers Weekly

"The everyday ups and downs of Bea’s life will befamiliar to readers, who are sure to appreciate Bea’s perky humor."—Booklist

"Zemke has a gift for portraying the trials and tribulations of elementary school.... A promising
launch to this new series. Pass this one to aspiring artists, those missing a friend, or
anyone who could use a laugh as she navigates childhood."—BCCB