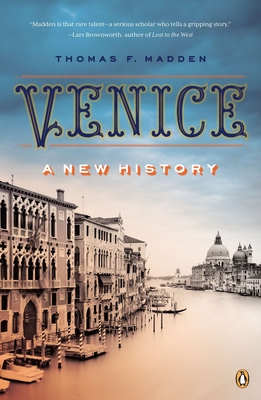 A spellbinding new portrait of one of the world’s most beloved cities, from the author of Istanbul

La Serenissima. Its breathtaking architecture, art, and opera ensure that Venice remains a perennially popular destination for tourists and armchair travelers alike. Yet most of the available books about this magical city are either facile travel guides or fusty academic tomes. In Venice, renowned historian Thomas F. Madden draws on new research to explore the city’s many astonishing achievements and to set 1,500 years of Venetian history and the endless Venetian-led Crusades in the context of the ever-shifting Eurasian world. Filled with compelling insights and famous figures, Venice is a monumental work of popular history that’s as opulent and entertaining as the great city itself.

Thomas F. Madden is Professor of History and Director of the Center for Medieval and Renaissance Studies at Saint Louis University. He has written and lectured extensively on the ancient and medieval Mediterranean as well as the history of Christianity and Islam. Awards for his scholarship include the Medieval Academy of America's Haskins Medal and the Medieval Institute's Otto Grundler Prize. He is a Fellow of the John Simon Guggenheim Foundation, the American Council of Learned Societies, and the Medieval Academy of America. His books include Venice: A New History and Istanbul: City of Majesty at the Crossroads of the World.

"Breezy, cheerful, evenhanded, Madden debunks myths about Venetian decadence, and brushes aside ugly whispers about greedy, unscrupulous merchants.  When a colorful character pops up (Marco Polo, Casanova), he makes the most of it in his brisk, no-nonsense prose."—New York Times

“Madden paints a vivid portrait of “a city without land, an empire without borders.” His engaging work enters a sparse historiography that includes Roger Crowley’s City of Fortune (2012) and John Julius Norwich’s enduring A History of Venice (1982) and separates itself by offering a readable overview backed by solid research.  Readers will come away from Madden’s Venice with newfound respect for one of the great jewels of Western civilization.”—Booklist (starred review)

“A savory, tantalizing, but not-so-serene history of La Serenessima.”—Publishers Weekly

“Madden proves the perfect guide to the magical city of Venice. His history is not only authoritative and encyclopedic, encompassing everything from the plundering of Attila the Hun to Katharine Hepburn’s tribulations while filming Summertime, it is also unfailingly readable and amusing—a must-read for Europhiles, armchair travelers, and history buffs.”—Ross King, author of Brunelleschi’s Dome and Leonardo and The Last Supper

“Thomas Madden’s portrait of Venice glows like one of the city’s own rich and colorful artworks—a tapestry woven from a thousand tales, with unforgettable characters, daring exploits, and inspiring triumphs against overwhelming odds. It’s all here: free enterprise and free thought, voyages and empire-building between East and West, and some of the world’s most magnificent achievements in architecture, painting, and music. All the threads of Venetian history are traced with a scholar’s zeal for accuracy. But Madden is also a born storyteller, with a keen eye for the illuminating detail that can bring a scene to life, from Roman refugees fleeing Attila the Hun to modern tourists invading the Rialto. For those who think they know Venice, Madden’s book will be a revelation. For newcomers, this comprehensive overview is essential reading.”—John R. Hale, author of Lords of the Sea

“Madden is that rare talent—a serious scholar who tells a gripping story. He breathes life into Venetian history in all its subtle complexity, rescuing the Venetians from the common stereotype of one-dimensional merchants. This book is a fantastic read.”—Lars Brownworth, author of Lost to the West: The Forgotten Byzantine Empire that Rescued Western Civilization