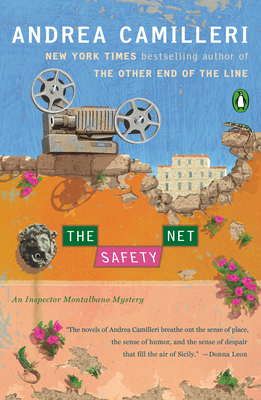 This is book number 25 in the An Inspector Montalbano Mystery series.

Vigàta is bustling as the new filming location for a Swedish television series set in 1950. In the production frenzy, the director asks the locals to track down movies and vintage photos to faithfully recreate the air of Vigata in that time. Engineer Ernesto Sabatello, while rummaging in the attic of his house, finds some films shot by his father from 1958 to 1963, always on the same day, March 27 and always the same shot; the outside wall of a country house. Montalbano hears the story, and intrigued by the mystery of it, begins to investigate its meaning. Meanwhile, a middle school is threatened by a group of armed men, and a closer look at the situation finds Montalbano looking into the students themselves and finally delving into the world of social media.
Andrea Camilleri, a mega-bestseller in Italy and Germany, is the author of the New York Times bestselling Inspector Montalbano mystery series as well as historical novels that take place in nineteenth-century Sicily. His books have been made into Italian TV shows and translated into thirty-two languages. His thirteenth Montalbano novel, The Potter's Field, won the Crime Writers' Association International Dagger Award and was longlisted for the IMPAC Dublin Literary Award.