The Pyramid of Mud (An Inspector Montalbano Mystery #22) (Paperback) 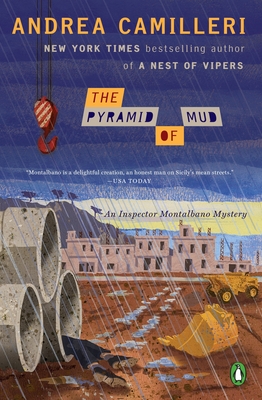 The Pyramid of Mud (An Inspector Montalbano Mystery #22) (Paperback)

This is book number 22 in the An Inspector Montalbano Mystery series.

“You either love Andrea Camilleri or you haven’t read him yet. Each novel in this wholly addictive, entirely magical series, set in Sicily and starring a detective unlike any other in crime fiction, blasts the brain like a shot of pure oxygen...transporting. Long live Camilleri, and long live Montalbano.”
—A.J. Finn, #1 New York Times bestselling author of The Woman in the Window

On a gloomy morning in Vigàta, a call from Fazio rouses Inspector Montalbano from a nightmare. A man called Giugiù Nicotra has been found dead in the skeletal workings of a construction site, a place now entombed by a sea of mud from recent days of rain and floods. Shot in the back, he had fled into a water supply system tunnel. The investigation gets off to a slow start, but all the evidence points to the world of construction and public contracts, a world just as slimy and impenetrable as mud.

As he wades through a world in which construction firms and public officials thrive, Montalbano is obsessed by one thought: that by going to die in the tunnel, Nicotra had been trying to communicate something.
Andrea Camilleri, a mega-bestseller in Italy and Germany, is the author of the New York Times bestselling Inspector Montalbano mystery series, as well as historical novels that take place in nineteenth-century Sicily. His books have been made into Italian TV shows and translated into thirty-two languages. His thirteenth Montalbano novel, The Potter’s Field, won the Crime Writers’ Association International Dagger Award and was longlisted for the IMPAC Dublin Literary Award.