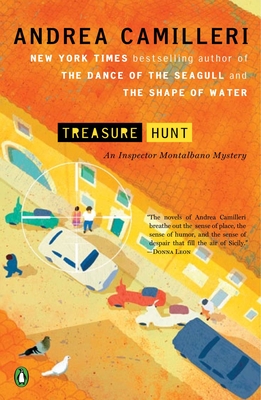 This is book number 16 in the An Inspector Montalbano Mystery series.

A hail of bullets interrupts a period of dead calm. An elderly brother and sister open fire on the plaza below their apartment, punishing the people of Vigàta for their sins. News cameras capture Montalbano—gun in hand—as he scales the building to capture the ancient snipers. Inside he finds a nightmarish world of religious objects and a well-worn inflatable sex doll that will come back to haunt him. The Inspector is hailed as a hero after the televised adventure and calm returns. But Montalbano begins to receive cryptic messages in verse, challenging him to go on a "treasure hunt." Intrigued, he accepts, treating the messages as amusing riddles—until they take a dangerous turn.
Andrea Camilleri is the internationally bestselling author of the popular Inspector Montalbano series, as well as historical novels set in nineteenth-century Sicily. He lives in Italy.

Stephen Sartarelli is an award-winning translator and poet. He lives in France.

“Camilleri’s Inspector Montalbano mysteries might sell like hotcakes in Europe, but these world-weary crime stories were unknown here until the oversight was corrected (in Stephen Sartarelli’s salty translation) by the welcome publication of The Shape of Water…This savagely funny police procedural…prove[s] that sardonic laughter is a sound that translates ever so smoothly into English.”—The New York Times Book Review