The Age of Doubt (An Inspector Montalbano Mystery #14) (Paperback) 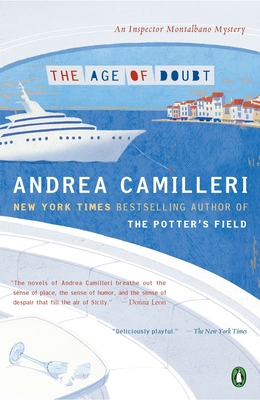 The Age of Doubt (An Inspector Montalbano Mystery #14) (Paperback)

This is book number 14 in the An Inspector Montalbano Mystery series.

“You either love Andrea Camilleri or you haven’t read him yet. Each novel in this wholly addictive, entirely magical series, set in Sicily and starring a detective unlike any other in crime fiction, blasts the brain like a shot of pure oxygen...transporting. Long live Camilleri, and long live Montalbano.”
—A.J. Finn, #1 New York Times bestselling author of The Woman in the Window

The day after a storm floods Vigàta, Inspector Montalbano encounters a strange, bedraggled woman who expresses interest in a certain yacht scheduled to dock that afternoon. Not long after she's gone, the crew of the yacht reports having found a dinghy in the port, and within it, a disfigured corpse. Also at anchor is an eighty-five-foot luxury boat with a somewhat shady crew. Both boats will have to stay in Vigàta until the investigation is over—the unidentified man was poisoned, it seems. Based on the information—and misinformation—the mysterious woman shared with him, Montalbano begins to think the occupants of the yacht just might know a little more about the man's death than they're letting on.
Andrea Camilleri is the bestselling author of the popular Inspector Montalbano mystery series, as well as historical novels that take place in nineteenth-century Sicily. He lives in Rome.

Stephen Sartarelli (translator) is an award-winning translator and poet. He lives in France.

“The books are full of sharp, precise characterizations and with subplots that make Montalbano endearingly human… Like the antipasti that Montalbano contentedly consumes, the stories are light and easily consumed, leaving one eager for the next course.”—New York Journal of Books

“This series is distinguished by Camilleri’s remarkable feel for tragicomedy, expertly mixing light and dark in the course of producing novels that are both comforting and disturbing.”—Booklist

“Hailing from the land of Umberto Eco and La Cosa Nostra, Montalbano can discuss a pointy-headed book like Western Attitudes Towards Death as unflinchingly as he can pore over crime-scene snuff photos. He throws together an extemporaneous lunch…as gracefully as he dodges advances from attractive women.”—Los Angeles Times

“In Sicily, where people do things as they please, Inspector Montalbano is a bona fide folk hero.”—The New York Times Book Review

“Camilleri as crafty and charming a writer as his protagonist is an investigator.”—The Washington Post

“Montalbano is a delightful creation, an honest man on Sicily’s mean streets.”—USA Today

“The humor and humanity of Montalbano make him an equally winning lead character.”—Publishers Weekly