The Track of Sand (An Inspector Montalbano Mystery #12) (Paperback) 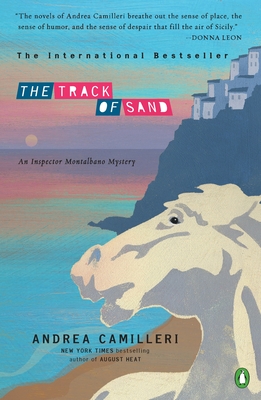 The Track of Sand (An Inspector Montalbano Mystery #12) (Paperback)

This is book number 12 in the An Inspector Montalbano Mystery series.

Inspector Salvatore Montalbano wakes from strange dreams to find a gruesomely bludgeoned horse carcass in front of his seaside home. When his men came to investigate, the carcass has disappeared, leaving only a trail in the sand. Then his home is ransacked and the inspector is certain that the crimes are linked. As he negotiates both the glittering underworld of horseracing and the Mafia's connection to it, Montalbano is aided by his illiterate housekeeper, Adelina, and a Proustian memory of linguate fritte. Longtime fans and new readers alike will be charmed by Montalbano's blend of unorthodox methods, melancholy self-reflection, and love of good food.
Andrea Camilleri is the bestselling author of the popular Inspector Montalbano Mystery series, as well as a number of historical novels that take place in Sicily. He lives in Italy.

Stephen Sartarelli is an award-winning translator and poet who lives in France.

"This series is distinguished by Camilleri's remarkable feel for tragicomedy, expertly mixing light and dark in the course of producing novels that are both comforting and disturbing."
-Booklist