The Wings of the Sphinx (An Inspector Montalbano Mystery #11) (Paperback) 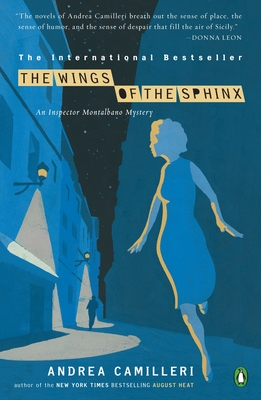 The Wings of the Sphinx (An Inspector Montalbano Mystery #11) (Paperback)

This is book number 11 in the An Inspector Montalbano Mystery series.

Things are not going well for Inspector Salvo Montalbano. His relationship with Livia is once again on the rocks and—acutely aware of his age—he is beginning to grow weary of the endless violence he encounters. Then a young woman is found dead, her face half shot off and only a tattoo of a sphinx moth giving any hint of her identity. The tattoo links her to three similarly marked girls-all victims of the underworld sex trade-who have been rescued from the Mafia night-club circuit by a prominent Catholic charity. The problem is, Montalbano's inquiries elicit an outcry from the Church and the three other girls are all missing.
Andrea Camilleri's Montalbano mystery series, bestsellers in Italy and Germany, has been adapted for Italian television and translated into German, French, Spanish, Portuguese, Greek, Japanese, Dutch, and Swedish. He lives in Rome.
Stephen Sartarelli lives in upstate New York.