Eichmann in Jerusalem: A Report on the Banality of Evil (Paperback) 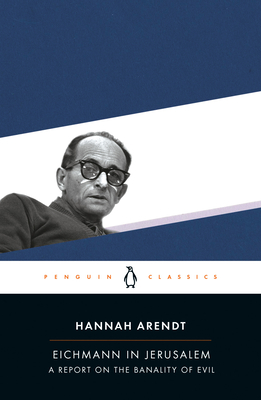 Eichmann in Jerusalem: A Report on the Banality of Evil (Paperback)


Ships quickly (1-7 days)
The controversial journalistic analysis of the mentality that fostered the Holocaust, from the author of The Origins of Totalitarianism

Sparking a flurry of heated debate, Hannah Arendt’s authoritative and stunning report on the trial of German Nazi leader Adolf Eichmann first appeared as a series of articles in The New Yorker in 1963. This revised edition includes material that came to light after the trial, as well as Arendt’s postscript directly addressing the controversy that arose over her account. A major journalistic triumph by an intellectual of singular influence, Eichmann in Jerusalem is as shocking as it is informative—an unflinching look at one of the most unsettling (and unsettled) issues of the twentieth century.
Hannah Arendt (1906-1975) was University Professor of political philosophy in the graduate Faculty of the New School for Social Research, a visiting professor at several universities including California, Princeton, Columbia, and Chicago, a research director of the Conference on Jewish Relations, the chief editor of Schocken Books, and the executive director of Jewish Cultural Reconstruction in New York City. She was awarded a Guggenheim Fellowship in 1952, and an Arts and Letters Grant of the National Institute of Arts and Letters in 1954. She is also the author of On Revolution and Between Past and Future, which are available from Penguin Classics along with The Portable Hannah Arendt.

Amos Elon (1926–2009) was born in Vienna, Austria, and spent most of his adult life in Jerusalem. A frequent essayist, lecture, and critic who was well known for his articles in The New Yorker and The New York Review of Books, he is the author of such bestselling works as The Israelis, Flight into Egypt, Founder, Herzel, and The Pity of It All: A Portrait of the German-Jewish Epoch.

“Profound . . . This book is bound to stir our minds and trouble our consciences.” —Chicago Tribune

“Deals with the greatest problem of our time . . . the problem of the human being within a modern totalitarian system.” —Bruno Bettelheim, The New Republic