Why I Am So Wise (Penguin Great Ideas) (Paperback) 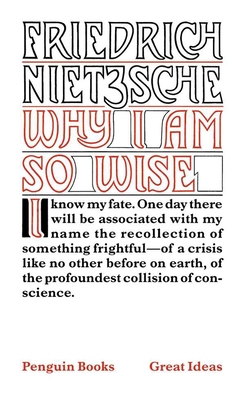 Why I Am So Wise (Penguin Great Ideas) (Paperback)


On Our Shelves Now
Throughout history, some books have changed the world. They have transformed the way we see ourselves—and each other. They have inspired debate, dissent, war and revolution. They have enlightened, outraged, provoked and comforted. They have enriched lives—and destroyed them.

Now, Penguin brings you the works of the great thinkers, pioneers, radicals and visionaries whose ideas shook civilization, and helped make us who we are. Penguin's Great Ideas series features twelve groundbreaking works by some of history's most prodigious thinkers, and each volume is beautifully packaged with a unique type-drive design that highlights the bookmaker's art. Offering great literature in great packages at great prices, this series is ideal for those readers who want to explore and savor the Great Ideas that have shaped the world.

One of the most iconoclastic thinkers of all time, Friedrich Nietzsche continues to challenge the boundaries of conventional religion and morality with his subversive theories of the 'superman', the individual will, the death of God and the triumph of an all-powerful human life force.

The philosopher Friedrich Nietzsche was born in Prussia in 1844. After the death of his father, a Lutheran minister, Nietzsche was raised from the age of five by his mother in a household of women. In 1869 he was appointed Professor of Classical Philology at the University of Basel, where he taught until 1879 when poor health forced him to retire. He never recovered from a nervous breakdown in 1889 and died eleven years later. Known for saying that “god is dead,” Nietzsche propounded his metaphysical construct of the superiority of the disciplined individual (superman) living in the present over traditional values derived from Christianity and its emphasis on heavenly rewards. His ideas were appropriated by the Fascists, who turned his theories into social realities that he had never intended.
R. J. Hollingdale has translated eleven of Nietzsche’s books and published two books about him. He has also translated works by, among others, Schopenhauer, Goethe, E. T. A. Hoffmann, Lichtenberg and Theodor Fontane, many of these for the Penguin Classics. He is Honorary President of the British Nietzsche Society, and was for the Australian academic year 1991 Visiting Fellow at Trinity College, Melbourne.