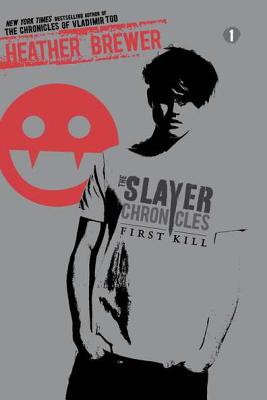 By Heather Brewer
This book might be hard to find. Ask a bookseller for more information.
Hard to Find

This is book number 1 in the The Slayer Chronicles series.

The first book in the fantastic new series from the creator of The Chronicles of Vladimir Tod--now in paperback!

Over a million readers have heard Vlad Tod's story; now it's time to hear Joss's. When Joss McMillan witnesses his sister's murder--at the hands of a vampire--his whole life changes. He learns that not only is his family part of the Slayer Society, a group whose mission is to rid the world of vampires, but he is their new recruit. As Joss trains he discovers powers that could make him the youngest, strongest Slayer in history. But there is a traitor in the Society, one whose identity would shake Joss to the core . . . if the traitor doesn't kill him first.

Written from the perspective of Vlad's former friend turned mortal enemy--vampire slayer Joss McMillan--this is the first in a series of five books that can be read alongside Vlad Tod or entirely on their own.

Heather Brewer lives near St. Louis, Missouri, with her husband and two children.

"Readers who still have an appetite for vampire lore, and a willingness to enter what looks to be like another fairly well-written series, will appreciate Joss as a character who is both sensitive and brave, as well as smart." — VOYA