Voice of the Violin (An Inspector Montalbano Mystery #4) (Paperback) 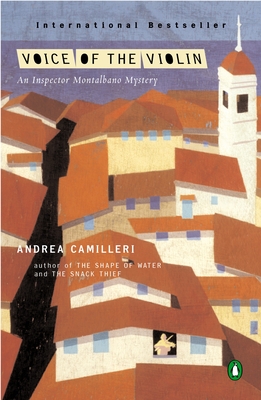 Voice of the Violin (An Inspector Montalbano Mystery #4) (Paperback)

This is book number 4 in the An Inspector Montalbano Mystery series.

Inspector Montalbano, praised as “a delightful creation” (USA Today), has been compared to the legendary detectives of Georges Simenon, Dashiell Hammett, and Raymond Chandler. As the fourth mystery in the internationally bestselling series opens, Montalbano’s gruesome discovery of a lovely, naked young woman suffocated in her bed immediately sets him on a search for her killer. Among the suspects are her aging husband, a famous doctor; a shy admirer, now disappeared; an antiques-dealing lover from Bologna; and the victim’s friend Anna, whose charms Montalbano cannot help but appreciate... But it is a mysterious, reclusive violinist who holds the key to the murder.
Andrea Camilleri's Montalbano mystery series, bestsellers in Italy and Germany, has been adapted for Italian television and translated into German, French, Spanish, Portuguese, Greek, Japanese, Dutch, and Swedish. He lives in Rome.
Stephen Sartarelli lives in upstate New York.